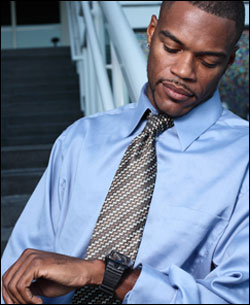 How can you gain an edge when you’re in the seemingly weak position of negotiating a favor from a government or a powerful bureaucracy? Present the other side with a draft agreement that authorizes or approves your request. Busy bureaucrats who lack a strong grasp of the details at hand are likely to seize on your text as a time-saver. That’s precisely why Washington lobbyists put drafts of the laws they desire, usually written by high-priced attorneys, in the hands of congressional staff.

You can apply this technique in many realms. If your boss keeps promising to finalize your updated compensation structure but can’t seem to find the time to meet, put a draft on her desk that reflects your understanding of the new terms—and that requires nothing more than a signature from her. If you and your neighbors want speed bumps installed on your block, draft a resolution outlining specific details before your meeting with local officials.

Or consider what an English diplomat did when his son, who attended high school in Belgium, was applying to universities in the United Kingdom. The universities required a statement, written in English, translating the Belgian school’s grading structure into one similar to the English system. The boy’s father presented the Belgian school’s headmistress with a draft letter providing the necessary explanation. The headmistress printed the draft on her letterhead and sent it off to England the same day.

When you present the busy and powerful with drafts, you increase the odds that your favor will be granted—and save everyone’s valuable time.

No Responses to “Dealing with Busy People”