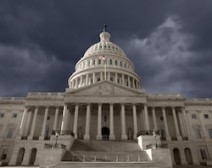 An unlikely, if loose, coalition has formed in Congress, the New York Times reports: far-left liberals have been teaming up with libertarians to pass a variety of amendments to appropriation bills. The creative dealmaking comes at a point when many Americans had begun to believe that Congress is hopelessly stalemated by an unwillingness to engage in collaborative negotiation.

On June 19, Republican Representative Thomas Massie of Kentucky, a libertarian, teamed up with two liberal Democrats, Zoe Lofgren of California and Rush D. Holt of New Jersey, to push through an amendment that places new prohibitions on the National Security Agency and the CIA’s surveillance operations, including barring the agencies from engaging in warrantless collection of Americans’ online activity, the Times reports.

And on July 10, the House of Representatives voted to approve an amendment brought forth by Representative Rosa DeLauro, a liberal, to ban federal contracts for companies that take advantage of offshore tax havens such as Bermuda. Thirty-four Republicans crossed party lines to vote in support of the amendment.

The coalition is “real and growing,” Massie told the Times, with both sides working “very hard” to form coalitions. The negotiated amendments are expected to be taken up again when House and Senate negotiators meet after the November election to put together a broad appropriations bill for the next fiscal year.

The unexpected surge of cooperation suggests several pieces of advice that business negotiators may follow when they have trouble seeing eye to eye with a counterpart:

The process of negotiating and proposing amendments to Congressional appropriations bills has been characterized as freewheeling and unfettered. The relatively low-risk process gave parties opportunities to reach across the aisle. Similarly, business negotiators can look for low-key opportunities to bridge differences, such as meeting informally in between established negotiation periods.

Though liberals and libertarians traditionally have widely divergent views on a host of issues, their interests also overlap in key areas, such as a shared view that government sometimes impinges on citizens’ freedom of choice. We all have the ability to improve our negotiation skills by focusing on areas of agreement rather than on issues where we disagree.

Some of the issues on which liberals and libertarians are finding common ground are decidedly narrow and/or relatively uncontroversial, such as legislation in the works to repeal a law against unlocking a cellphone tied to a particular carrier. By working together on smaller issues, traditional enemies can build the trust and respect they will need to tackle more difficult issues in the future.

One Response to “Cooperation in Congress? Liberals and Libertarians Polish Their Negotiation Skills”