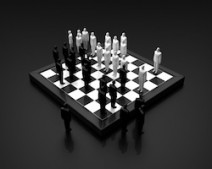 New research shows that our stereotypes about other people’s warmth and competence often mar our decisions and behavior in negotiations.

Think back to the last time you had to choose between two job candidates, assess the pitches of two different salespeople, or side with one party in a conflict.

What were your first impressions of each person?

Did you immediately find one to be warmer and the other to be more competent?

To what extent do you think these impressions persisted, impacting your negotiation style and your decisions?

In all likelihood, your snap judgments about the people you were assessing weighed heavily in your decision-making process, whether you realized it or not.

Upon meeting someone new—or, for that matter, sizing up someone familiar after an absence—we take their measure in seconds, relying on facial features and expressions, posture, tone of voice, and other cues. In addition, stereotypes based on gender, race, nationality, age, and other differences loom large in our assessments even before we begin negotiation conversations.

Our evaluations of others are dominated by judgments of their warmth and competence, research by professors Amy J.C. Cuddy of Harvard Business School, Susan Fiske of Princeton University, and Peter Glick of Lawrence University has shown.

In this article, we examine how these researchers’ discoveries about snap judgments can help you make more rational, thoughtful decisions in negotiation, practice effective communication skills, and encourage your counterparts to do the same.

You might be surprised to learn that warmth and competence make up a full 80% of our judgments of others.

In both personal and negotiation conversations, we perceive warmth before competence and usually weigh warmth more heavily. In certain conditions, such as hiring and promotions, however, we care more about competence than warmth, Cuddy and her colleagues have found.

These facts make sense when viewed in light of human evolution. Like our earliest ancestors, when encountering a stranger, we try to quickly size up whether the person is a friend or foe.

That is, we ask ourselves, What are her intentions toward me?

Intentions can be judged on a continuum ranging from warm to cold.

Warmth encompasses traits such as trustworthiness, sincerity, friendliness, and kindness; coldness encompasses opposite traits, from deception to cruelty, write Cuddy and her colleagues.

After determining someone’s intentions toward us, we next assess her ability to carry them out.

That’s where competence comes in:

In negotiation conversations, questions of warmth and competence are crucial. Will a counterpart react positively to your attempts to create value, or will he try to take advantage of such efforts?

If a counterpart seems to care only about his own outcomes, how capable is he of grabbing the lion’s share for himself?

Without even realizing it, we make such assessments in the earliest moments of talks.

Imagine that you have just interviewed two job candidates: an Asian American man and a white woman who is a working mother.

Independent of their unique personalities, racial and gender stereotypes likely will dominate your judgments of their warmth and competence.

Because perceived competence appears to trump warmth in hiring decisions, the Asian American man will have the edge, all else being equal.

We’re guilty of many other unfair stereotypes regarding warmth and competence, researchers have discovered.

The elderly and the disabled are typically viewed as warm and incompetent, for example. Like Asian Americans, African American professionals and Jews tend to be perceived as competent and cold.

Sadly, the poor and the homeless tend to be viewed as both cold and incompetent. A career woman can expect to be judged as competent and cold— until she has a child and appears warmer but less competent.

By contrast, men experience a “fatherhood bonus,” making gains in both perceived warmth and perceived competence after having a child.

It seems mothers lose points for subverting traditional gender roles by working outside the home, but working fathers are admired for “chipping in” at home.

As these research findings show, with some exceptions (such as working fathers and the poor), we usually view warmth and competence (and coldness and incompetence) as mutually exclusive. If someone is warm and friendly, we reason, he must be overcompensating for a lack of intelligence.

And if someone is highly skilled at her job, she can get by without strong social skills, right?

Breaking down Cuddy, Fiske, and Glick’s model of stereotypes further, the judgments we make about warmth and competence trigger particular emotions.

People generally feel contempt and disgust toward “cold” low-status groups, such as the poor, and choose to ignore them.

And most people admire and respect “warm” relatively high-status groups that they don’t perceive as competition (often because they are members of the group themselves), such as the middle class, and want to associate with them.

The impulse to categorize others and react accordingly probably served our forebears well when they encountered potentially threatening strangers.

In today’s complex world, however, stereotypes lead us astray. Snap judgments cause us to make a variety of mistakes in negotiation, no matter what your business negotiation skills may be. They cause us to trust people who are deceptive. They cause us to undervalue how much certain people—who may be more competent than we think—could help us.

Perhaps most commonly, when we view a counterpart as a tough competitor, we are apt to dislike and distrust her (because she seems cold to us), thus forgoing opportunities to create and claim value and perhaps increasing the odds of impasse in negotiation conversations.

Compounding the problem, when we compare people or groups, we exaggerate their perceived differences in warmth and competence.

Consider the stereotypes that formed around the two major U.S. political parties in past decades: Democrats traditionally were painted as compassionate (warm) but fiscally irresponsible (incompetent); Republicans were portrayed as unfeeling (cold) but fiscally conservative (competent).

Similarly, in hiring negotiations, it’s easy to see how black-and-white comparisons between applicants can emerge and potentially sabotage your decisions.

You might protest that you routinely help the poor and that you have nothing but respect for the elderly. Indeed, we all have the power to look beyond stereotypes and treat our negotiating counterparts as individuals with unique personalities and needs.

But our reactions occur so quickly and are so deeply ingrained that we must consciously strive to keep them from overshadowing more reasoned thought.

The following advice from Cuddy can help you avoid judging others prematurely—and being judged too swiftly yourself.

1. Take your time.
Snap judgments compromise negotiation conversations and tend to win out when our minds are taxed by constraints on our time and attention. Spend time getting to know your negotiating counterpart as an individual, and remain open to revising your opinion upon learning more about her. Remember, warmth and competence can coexist.

2. Play up hidden strengths.
To reduce the impact of stereotypes on your counterparts’ judgments, consider emphasizing aspects of your personality that might otherwise be overlooked.

George W. Bush, for example, adopted the term “compassionate conservative” during his first presidential race to try to capitalize on the perceived strengths of both political parties. Look for subtle ways to let the “real you” shine though.

3. Work on your style.
Though we judge others foremost on their warmth, we ourselves care more about seeming competent than warm. This can cause us to spend so much time honing our message that we forget to smooth out our style, says Cuddy. That’s a problem, because how you communicate can have a bigger influence than what you say.

Strive to connect with your counterpart by listening closely to her needs. It’s likely to be a far more successful strategy than trying to impress her with your intelligence.