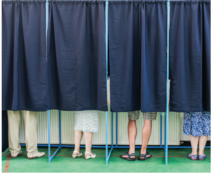 When engaged in a complex negotiation or dispute, how should a group come to agreement? Members might separate into factions and fight to have their voices heard. They might take a vote and let the majority rule. Or they can try to negotiate their way to consensus.

There are almost as many ways of making group decisions as there are types of groups. Here, we look at three recent decision-making processes in the political realm with the aim of identifying best practices as well as pitfalls to avoid.

After talk-radio host Leeann Tweeden accused Minnesota senator Al Franken in November 2017 of sexual harassment during a 2006 USO tour, Senate Republican majority leader Mitch McConnell and Democratic minority leader Chuck Schumer called for an Ethics Committee investigation into the allegations, but neither they nor other senators called for Franken to resign. Many Senate Democrats were cautiously optimistic that Tweeden’s accusations were an anomaly.

But as other women began leveling similar accusations against Franken in the weeks that followed, frustration reportedly grew among a group of Democratic female senators, who reportedly discussed the situation in person, on the phone, and in text messages, according to Politico. When the number of Franken’s accusers reached six, according to one aide, it was understood among the senators that they would call for Franken’s resignation if another credible story of misconduct emerged, according to Politico.

That day came on December 6, when Politico reported that a former Democratic congressional aide said Franken had tried to forcibly kiss her in 2006, a charge that Franken denied. In response to the new accusation, Democratic senator Kirsten Gillibrand of New York tweeted, “The allegations against Sen. Franken cannot be tolerated. While he’s entitled to an Ethics Committee hearing, I believe he should step aside to let someone else serve.”

Within minutes, five other Democratic female senators also called on Franken to resign. Democratic male senators began following suit. By the end of the day, the majority of Senate Democrats had publicly expressed the belief that Franken should go, while some, including Schumer, pressed him privately to do so.

The next day, sounding defiant, Franken announced his impending resignation on the floor of the Senate and insinuated that President Donald Trump and Alabama senatorial candidate Roy Moore had committed far worse transgressions.

“It wasn’t coordinated,” Democratic senator Patty Murray of Washington told Politico of the momentum that built toward pushing Franken to resign. “It just happened.”

An informal process. The reportedly organic way in which Franken’s departure was discussed and decided shows what can happen when a group faces mounting pressure to address a crisis that is hindering (or threatening to hinder) the group’s effectiveness. In such cases, momentum may grow inexorably toward consensus.

This type of amorphous, informal decision-making process can help an impassioned faction gain a voice when it feels it isn’t being heard. But it also risks being criticized as unmethodical, biased, and illegitimate. In the Franken case, Democratic senators deemed the formal protocol for resolving the matter of his future in the Senate—an ethics investigation—to be too slow-moving to deal with the crisis. Groups that regularly face high-stakes or controversial decisions would be wise to set up in advance formal negotiation and dispute-resolution processes that can be triggered quickly to help them deal with conflict and uncertainty if it arises.

In Germany, a splintering coalition

This past September, the future of German chancellor Angela Merkel’s coalition government was cast in doubt after her party, the Christian Democrats, performed poorly in a parliamentary election due to significant headway made by the new openly nationalist party Alternative for Germany.

Under Germany’s parliamentary system, the Christian Democrats recently have governed as a “grand coalition” with the center-left Social Democrats. But following their own losses in September, the Social Democrats insisted other parties were needed to strengthen the coalition.

In October, Merkel launched four-way negotiations aimed at forming a new coalition government among the Christian Democrats, the Social Democrats, and two unlikely allies: the pro-business Free Democrats and the ecologically minded Greens. Merkel hoped her party would serve as the glue between the new recruits, but it didn’t turn out that way. “Instead of emphasizing points of agreement,” the New York Times wrote, “party leaders appeared at pains to emphasize their differences, fearful of having their political identities subsumed.” Free Democrat and Green negotiators reportedly denigrated one another’s positions and worldviews.

An amorphous, informal decision-making process risks being criticized as unmethodical, biased, and illegitimate.

On November 17, Christian Lindner, head of the Free Democrats, announced that his party was dropping out of the talks because the four parties “have no common vision for our country and no common basis of trust.” Lindner said that reaching agreement would mean being “forced to abandon convictions we have spent years fighting for,” according to the Times.

The prospect of a new round of elections loomed, with the major parties fearful of losing further ground. Some observers predicted the popularity of a greater number of political parties in Germany marked the beginning of the end of the Merkel era while also signaling the demise of the nation’s postwar political tradition of “change through consensus,” University of Oxford European studies professor Timothy Garton Ash told the Times.

Some observers say that’s a good thing, arguing that the two-party grand coalition has allowed centrist forces to dominate the minority. “A compromise is not always wise, but sometimes simply lazy,” business leader Mathias Döpfner wrote in Germany’s Bild newspaper.

Fractious factions. The more individuals or groups there are in a negotiation, the more complex and fractious talks are likely to be. And although consensus building becomes more complicated in
larger groups, it’s often needed more than ever.

In fact, consensus building is generally a more effective decision-making tool than a majority-rule vote in groups, write Lawrence E. Susskind and Jeffrey L. Cruikshank in their book Breaking Robert’s Rules: The New Way to Run Your Meeting, Build Consensus, and Get Results (Oxford University Press, 2006). That’s because the “losers” of a majority-rule vote often try to sabotage the group’s decision. By contrast, when a group seeks to reach an agreement that’s as close to unanimous as possible (the goal of consensus building), the final deal is much more likely to endure.

To develop consensus, fractious parties need to recognize the value of looking for tradeoffs across issues. If a person objects to a certain proposal, for instance, it’s up to her to suggest ways to make it more acceptable to her without making it worse for others, according to Susskind and Cruikshank. Appointing a neutral facilitator or mediator who can help parties focus on their similarities rather than their differences can also aid the consensus-building process.

The unique power of the swing voter

Republicans were jubilant after winning both the presidency and both houses of Congress in the 2016 election, but they soon discovered, in the words of the George Washington character in the musical Hamilton, that “winning was easy . . . governing’s harder.” In 2017, Congress failed repeatedly to achieve its signature policy goal of repealing Obamacare, for example, due to a lack of any Democratic support and the rebellion of individual Republican “swing voters” such as senators Susan Collins of Maine, John McCain of Arizona, and Rand Paul of Kentucky.

After that rocky start, Republicans were eager to pass a tax-reform bill by the end of the year. With passage requiring the support of almost all 52 Republicans, savvy moderates again recognized a clear opportunity to shape the legislation in return for their vote.

Collins influenced the bill more than any other swing voter. In fact, she negotiated changes equivalent to one-tenth of the bill’s net $1.4 trillion in tax cuts, the Wall Street Journal reported based on data from Congress’s Joint Committee on Taxation. She pushed to preserve certain tax deductions, expand others, and protect a retirement-contribution exclusion and a propertytax deduction. Collins also secured a commitment from McConnell to support separate legislation to slow the rise in health-care premiums.

In the end, the Senate passed the tax bill in a 51 to 49 vote. As the Senate and House worked to reconcile their bills before the close of 2017, Collins continued to negotiate to protect her changes.

Outsized influence. When a group negotiation or decision-making process hinges on an up-or-down vote, holdouts may be able to trade their vote for valued concessions. Yet swing voters must wield their power with care, as they risk being maligned as obstructionists or resented for their disproportionate impact on the group’s decisions. When swing voters gain an outsized influence over a group, other members may rebel by trying to push them out or by changing decision-making rules, perhaps in favor of consensus building.

Use your leverage as a “swing voter,” but be wary of incurring resentment.

Rather than allowing the majority to dominate, groups that engage in consensus building strive to meet the interests of everyone involved. As a result, consensus building is more likely than majority rule to result in a lasting agreement, according to Susskind and Cruikshank.