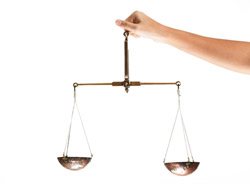 Planning to resolve a personal or business dispute in court? Consider that judges don’t make decisions based on a thorough accounting of all the relevant and available information.  Instead, like all of us, they rely on heuristics – simple mental shortcuts – to make decisions. Heuristics often lead to good decisions, but they can also create cognitive blinders that produce systematic errors.

One such heuristic is anchoring, or the common tendency for people making numerical estimates to rely on the initial value available to them and to give it greater influence over the final estimate than it should have. How does anchoring influence judges? U.S. Magistrate Judge Andrew J. Wistrich, Cornell Law professor Jeffrey J. Rachlinski, and Vanderbilt University Law School professor Chris Guthrie found that a demand made at a prehearing settlement conference anchored judges’ assessments of the appropriate amount of damages to award. Anchoring and other cognitive blinders can make it difficult for a judge to reach an accurate decision in your case.

When you’re thinking about resolving a dispute in court, remember that the decision that will be imposed on you is binding. If blinders lead a judge to grant a motion that should be denied, deny a motion that should be granted, assign responsibility to the wrong party, or award too much or too little in damages, there can be no going back.

State or federal appellate courts exist in part to correct judicial errors, but appeals occur infrequently and seldom lead to reversal. Even successful appeals add costs and delays to the dispute-resolution process. When you or your organization are embroiled in a dispute, how can you avoid the possibility of an erroneous but binding court decision? Negotiate instead!
Of course, you and your lawyers are likely to be influenced by the same blinders that affect judges – blinders that may compromise your negotiation ability. But there’s a significant difference between making a poor decision in a consensual process such as negotiation or mediation and being at the mercy of a judge’s mistakes.

Most judges are honest people who strive to reach fair decisions. To say that they misjudge is to say that they are human – that their decision making, like all of ours, is imperfect. But because judicial decisions carry so much weight, the research on misjudging offers a sound reason to negotiate, rather than litigate, whenever possible.