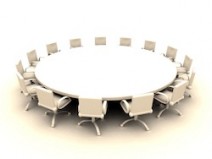 Peace talks in the Middle East between Israel and Palestine have stalled for years and many have come to expect a lack of progress in talks. That was until this week when Secretary of State John Kerry was successful in getting Palestinian and Israeli negotiators to sit down at the dinner table for a meal for the first time in years.

Farah Stockman, writing for the Boston Globe, says that if John Kerry has not already read Roger Fisher’s seminal work, Getting to Yes, he probably should…and soon. While the book was written over thirty years ago, its foundational principles and core message of creating value and enduring relationships between negotiators applies today more than ever to the situation between Israel and Palestine.

Fisher devoted his life to negotiation theory and practice after witnessing the violence of World War II. Fisher’s ideas are well known and rooted in what some would call common sense, but as Bruce Patton, co-author of Getting to Yes, reminds us, “…people don’t know them well, and aren’t able to execute well.”

To read more on how the principles described in Getting to Yes are applicable to the situation between Israel and Palestine, be sure to read Farah Stockman’s article on the Boston Globe website.

Click here to download your copy of our FREE special report, International Negotiations: Cross-Cultural Communication Skills for International Business Executives, from the Program on Negotiation at Harvard Law School.