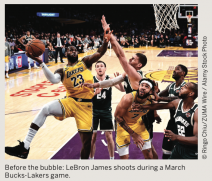 Group negotiations over emotional issues can quickly deteriorate. After a player walkout put the remainder of the National Basketball Association’s season in jeopardy, leaders stepped up to help players and owners come to an agreement they could all accept.

As we described in our August issue, the National Basketball Association (NBA) and the National Basketball Players Association (NBPA) agreed in June to wrap up the league’s 2019–20 season, which had been halted by the coronavirus, in a “bubble” at Disney World’s ESPN Wide World of Sports Complex. Players and staff would be protected from the outside world as they practiced and played televised games.

But, amid the Black Lives Matter protests following the killing of George Floyd, some players objected to being offered up as entertainment while isolated from family and friends. To make the bubble more palatable to Black players, who comprise about 80% of the NBA, the league began allowing them to kneel during the national anthem and wear agreed-upon protest slogans on their uniforms. “BLACK LIVES MATTER” was printed on court floors.

Some players expressed a desire to leave the bubble to reunite with their families and protest in their communities. Others thought the playoffs gave them the most visible protest platform.

As the NBA wrapped up its shortened regular season and commenced playoffs, it succeeded in keeping the coronavirus out of the bubble. But on August 23, after a White police officer shot Jacob Blake multiple times in the back in Kenosha, Wisc., some players questioned the point of playing basketball.

“We shouldn’t have even come to this damn place, to be honest,” Milwaukee Bucks guard George Hill said at a press conference the following day. “I think coming here just took all the focal points off what the issues are.”

Two days later, on Wednesday the 26th, the Bucks refused to come out of their locker room for a playoff game against the Orlando Magic. Hill and teammate Sterling Brown read a team statement calling on the Wisconsin state legislature to “take up meaningful measures to address issues of police accountability, brutality, and criminal justice reform.”

NBA team owners openly supported the protest, postponing all three of that day’s games. As compared to the National Football League, the NBA has a relatively harmonious relationship with its players. NBA owners split revenue evenly with players and give them some leeway to express their views on social issues. Earlier in August, NBA owners committed $300 million over 10 years to an economic empowerment fund for Black Americans. But, obviously, they had financial incentives to hope the players would finish up the season.

That evening, the players gathered within their bubble—first with coaches, then on their own—to discuss the issue.

The emotional meeting reportedly opened with a phone call to the family of Jacob Blake before turning to the question at hand. Some players expressed a desire to leave the bubble to reunite with their families and protest in their communities. Others thought the playoffs gave them the most visible protest platform, according to Yahoo! Sports.

A number of players reportedly groused that the Bucks’ hasty unilateral decision to boycott, which came without concrete demands, had caught them off guard and placed them in a difficult situation. After disrupting the playoffs, the Bucks irritated some players, including Los Angeles Lakers star LeBron James, by favoring a resumption of play.

Michele Roberts, the executive director of the players’ union, spoke up about the financial ramifications— especially to younger players—of ending the season. Los Angeles Clippers guard Patrick Beverley interrupted her and, when she asked to continue, said, “No, I pay your salary,” according to Yahoo! Sports. Other players told Beverley that disrespect would not be tolerated.

Miami Heat forward Udonis Haslem, a veteran player, reportedly reminded James that the league was likely to fall behind whatever decision he advocated. “We’re out,” James said. Most of his teammates and the Los Angeles Clippers filed out the door with him. No other teams joined them.

After three hours, tensions were running high, and the group agreed to reconvene the following morning. “The hope from the collective was after a good night’s sleep, players would be in a better space to make a sound decision,” Yahoo! Sports reports.

At the morning meeting, the Lakers and Clippers reversed course and joined the other teams in advocating for the playoffs to resume. When several players objected, James and other leaders in the group vowed to speak to team owners on their behalf— and to support ending the season if the owners were not responsive.

Meanwhile, another giant of the sport had stepped into the fray: NBA legend Michael Jordan, who owns the Charlotte Hornets and is the only Black majority owner in the league. Jordan reached out to NBPA president Chris Paul to find out what the players hoped to achieve, then offered to help them make their case to the NBA board of governors, ESPN.com reports.

During their own Thursday morning meeting, team owners expressed support for the players and discussed how they might amplify their voices while continuing the season. Jordan reportedly urged his colleagues to listen before offering solutions.

In a Zoom call that afternoon, James called on team owners to take more concrete actions to fight systemic racism and reportedly was reassured by their promises to do more. The playoffs resumed that weekend.

Here are a few takeaways from the recent negotiations within the NBA: