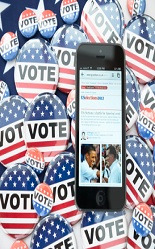 How important is body language to how you are perceived?

How about when you are debating national policy in front of millions of television viewers?

If you were ever in a tense negotiation or business situation, you know the importance of control over yourself so that no one can misinterpret your actions.

Program on Negotiation faculty member and Assistant Professor in the Negotiation, Organizations & Markets Unit at the Harvard Business School, Amy Cuddy, was a recent guest on CNN’s popular news show Anderson Cooper 360° to analyze the second of three presidential debates between current Democratic President Barack Obama and Republican challenger Mitt Romney from the perspective of the candidates’ body language.

For example, at the debate’s onset Cuddy praises Obama’s warm, genuine smile and notes that challenger Romney is smiling with his mouth, but not his eyes, denoting anxiety.

In another instance where President Obama nods to acknowledge what candidate Romney is saying, Amy Cuddy says that this common social cue might be misinterpreted by television viewers as weakness, because the nodding may passively indicate agreement.

These seemingly small physical acts have a range of psychological impacts on the people viewing at home, indicating positions of relative strength or weakness through movement rather than words.

Professor Cuddy’s work focuses on how we perceive and are influenced by others as well as the end-result of that influence by examining the roles of culture, emotions, nonverbal behaviors, and psychophysiological indicators.

She is particularly interested in various social categories, such as Asian-Americans, the elderly, or working mothers, and how they are judged by others and by their own social group.

Recent research investigates how nonverbal expressions of competence/power and warmth/connection change neuroendocrine levels, emotions, and the behaviors of the people performing these expressions, whether spontaneous or posed.

You can view the Anderson Cooper 360° segment embedded below.