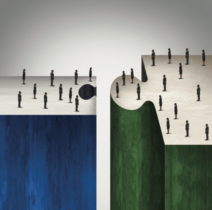 Organizations planning a merger need to come up with a concrete plan for ensuring they’ll mesh rather than clash. Facebook’s leaders and WhatsApp’s founders appeared to skip that vital step when negotiating the social media giant’s purchase of the text-messaging app in 2014—an oversight that led to mounting frustrations on both sides and, ultimately, a decisive split, as reported by Kirsten Grind and Deepa Seetharaman in the Wall Street Journal.

In 2009, Jan Koum and Brian Acton, engineers who had become friends while working at Yahoo, launched WhatsApp, a service that connects users across the globe for an annual fee of 99 cents. Due to their shared aversion to Yahoo’s display ads, Koum and Acton vowed to keep ads off the app and also made a commitment to user privacy: WhatsApp messages would be deleted after they were read.

The app filled a global need, attracting hundreds of millions of users within just a few years. In 2012, Facebook founder and CEO Mark Zuckerberg approached Koum about purchasing the company. Koum rebuffed him, turned off by Facebook’s ad-based revenue model, which capitalizes on user data and has taken a cavalier approach to privacy. But over the course of hikes and dinners, Zuckerberg nurtured a friendship with Koum and gained his trust.

In February 2014, Koum and Acton agreed to sell WhatsApp to Facebook for a staggering $19 billion—though WhatsApp was earning only about $20 million in revenue at the time from user fees. Koum and Acton would remain in charge of their business, and Koum was given a seat on Facebook’s board of directors.

Facebook’s leaders tried to persuade the WhatsApp founders to violate one of their core principles and allow advertising on the app.

Zuckerberg promised that WhatsApp would operate separately from Facebook and remain ad-free. Rather than taking his word for it, Koum and Acton negotiated for the right to exit their contracts and receive unvested stock guarantees prematurely if Facebook undertook “additional monetization initiatives,” such as ads, for WhatsApp, the Journal reports.

At the same time, Facebook “never publicly addressed how [the two companies’] divergent philosophies would coexist,” according to the Journal. The high sale price set up a tension: For Facebook to benefit from the deal financially, WhatsApp’s profits would have to grow— but that would be difficult without ads.

In January 2016, WhatsApp, which had reached one billion monthly users, did away with its annual user fee, which it said was hindering growth in developing nations. Koum revealed publicly that WhatsApp was looking into other revenue-generating sources, such as a service that would connect companies with their customers, but remained committed to keeping the app ad-free.

Around the same time, Facebook announced it would stop increasing the number of ads in its news feed, a decision that put pressure on WhatsApp and other Facebook properties to grow their profits, the Journal reports.

In August 2016, WhatsApp revealed it would begin sharing user phone numbers and other data with Facebook. Soon after, under pressure from Zuckerberg and Facebook COO Sheryl Sandberg, WhatsApp relocated its 200 employees from Mountain View, Calif., to Facebook headquarters in nearby Menlo Park. A culture clash ensued, with WhatsApp staff complaining about a noisy, Disneyesque environment and Facebook employees griping that their new neighbors had larger desks and nicer facilities.

In response to Sandberg’s and Zuckerberg’s call to boost revenues, Koum and Acton came up with several proposals, all of which were judged insufficient. Instead, Facebook’s leaders tried to persuade the WhatsApp founders to violate one of their core principles and allow advertising on the app. After all, Sandberg and Zuckerberg noted, Instagram had adopted ads relatively successfully after being bought by Facebook. But Koum and Acton continued to resist the idea.

Acton’s and Koum’s contracts with Facebook were due to expire in November 2018, at which point they were eligible to receive all their remaining shares in the company. But, fed up with the pressure they were facing to sacrifice their principles, both chose to walk away prematurely.

Acton, whose net worth is reportedly $6.9 billion, resigned in September 2017, forfeiting about $900 million in potential stock awards, according to the Journal. He reportedly tried to exercise the contractual clause allowing early vesting in his shares, but dropped it after Facebook threatened to fight back. Koum, who is worth about $9.3 billion, left Facebook in April 2018, giving up about $400 million worth of unvested shares.

Neither Acton nor Koum confronted Zuckerberg over their dissatisfaction with how the partnership had unfolded. Rather, they appear to have concluded they were “fighting a losing battle” and wanted to “preserve their relationship” with Facebook’s CEO, according to the Journal. But, months after Acton’s departure, when Facebook was under fire for sharing user data with a firm hired by Donald Trump’s presidential campaign, he tweeted that he was deleting his Facebook account; he also made a significant investment in Signal, a WhatsApp competitor.

WhatsApp will now be run by Facebook executive Chris Daniels, who has been assigned to find a more lucrative business model for the app.

1. Confront philosophical differences about business culture head-on. If you and a would-be partner have fundamentally different ideas about how to run your business, contractual guarantees may not be sufficient to ensure your view prevails. As recommended in our cover story, discuss your differences openly to determine whether you can reconcile or accept them. If not, this would-be partner may not be the right match.

2. Don’t over-weight good rapport. Sometimes negotiators spend time getting to know you because they genuinely want to understand and respond to your interests. But sometimes rapport-building efforts are simply aimed at trying to win you over. Be wary of promises that could be hard for the other party to keep.

3. Consider the downside of “winning.” Be aware that scoring an advantageous sale price could have hidden drawbacks. If the other party overpays, his or her efforts to recoup the investment could lead to business decisions that you disagree with.