Real Leaders Negotiate! – Gaining, Using, and Keeping
the Power to Lead Through Negotiation

A book talk with 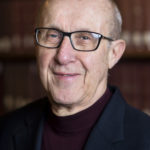 Real Leaders Negotiate! examines the central role of negotiation in gaining, exercising, and retaining leadership within organizations, large and small, public and private. Contrary to conventional wisdom that leaders command to achieve their goals, this book argues that to lead is to negotiate. Drawing on cases from government, business, and international relations, as well as his own wide ranging experience as a leader of various organizations over four decades, the author instructs readers on the ways to use negotiation to lead effectively throughout each of the three phases of the leadership lifecycle: 1) leadership attainment, 2) leadership action, and 3) leadership preservation and loss. Thus he explains how Warren Buffett through skillful negotiation saved Salomon Brothers from extinction, how President George H. W. Bush successfully negotiated the creation and mobilization of the international coalition that drove Saddam Hussein from Kuwait, and how Angela Merkel negotiated to defeat challenges to her position as Chancellor of Germany. While many scholars and professionals have viewed negotiation and leadership as separate strands of endeavor that have little to do with one another, in this book, as MIT’s Professor Lawrence Susskind has noted, the issues of leadership and negotiation have finally been joined.

Jeswald W. Salacuse, Tufts University Distinguished Professor and Henry J. Braker Professor of Law, served as The Fletcher School Dean for nine years and was previously Dean of the Southern Methodist University Law School. With a J.D. from Harvard University, Salacuse has been a lecturer in law at Ahmadu Bello University, Nigeria, a Wall Street lawyer, professor and research director at the National School of Administration, Congo, the Ford Foundation¹s Middle East advisor on law and development based in Lebanon, and later the Foundation¹s representative in Sudan. He has been a visiting professor in the United Kingdom, France, and Spain and held the Fulbright Distinguished Chair in Comparative Law in Italy. He has also served as a Visiting Professor of Law at Harvard Law School. The author of fifteen books, Salacuse has been Chairman of the Institute of Transnational Arbitration, Chairman of the Board of the Council for International Exchange of Scholars, and the founding President of the Association of Professional Schools of International Affairs (APSIA). A member of the Council on Foreign Relations, the American Law Institute, and the executive committee and faculty of the Program on Negotiation at Harvard Law School, he is also Chairman of the India Fund and Asia Tigers Fund, and president and member of international arbitration tribunals of the World Bank¹s International Centre for Settlement of Investment Disputes. He was formerly lead independent director of the Legg Mason closed-end funds, and currently serves as President of the Faculty Senate of Tufts University.