The Program on Negotiation and Religions and the Practice of Peace at Harvard Divinity School
are pleased to co-sponsor:

Sustaining Peace:
The Role of Ethics, Law, and Policy
in Promoting a New International Security Paradigm

Part of the Religions and the Practice of Peace Colloquium 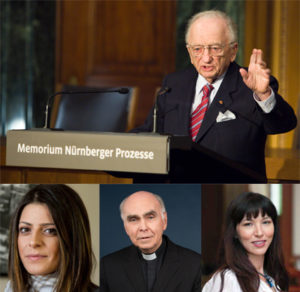 Recipient of the Harvard Law School Medal of Freedom 2014,
Former United States Prosecutor at the International Military Tribunal at Nüremberg

Space is limited. RSVP is required.

International peace, with the promotion of more just and peaceful societies, is a fundamental goal of the United Nations (UN). Peace, however, has been elusive. In response to disturbing trends, such as the spike in violent conflict worldwide and unparalleled levels of forced displacement, the UN broke new conceptual ground in 2016 with “peacebuilding resolutions” A/RES/70/262 and S/RES/2282. These resolutions set forth a new UN-wide approach to “sustaining peace” that addresses “all stages of conflict” and “all its dimensions,” aiming to help prevent “the outbreak, escalation, continuation, and recurrence of conflict.” What can law, policy, and ethics teach us about “sustaining peace”? How can the UN be assisted in forging a more coherent vision of this new paradigm?

Benjamin B. Ferencz is a Harvard alumnus (HLS ’43), an American lawyer, and the last living prosecutor of the Nüremberg Military Tribunals, set up by the Allied Powers to prosecute Nazi atrocities in the aftermath of World War II. After graduating from Harvard Law School, as a soldier in General Patton’s Army 3rd Infantry Division, Mr. Ferencz landed in Normandy and participated in the liberation of Nazi concentration camps. After being appointed Chief Prosecutor in the landmark case of the Schutzstaffel (SS) Einsatzgruppen, Mr. Ferencz became the Director General of the Jewish Restitutions Survivor Successor Organization, fighting to provide victims of Nazi crimes of all backgrounds and faith with compensation and restitution. For the past 70 years, Mr. Ferencz has been recognized as one of the most indefatigable proponents of international justice as a means towards world peace. He has advocated his entire life for the establishment a permanent international criminal court and to criminalize wars of aggression. In his 99th year of life, he remains one of the most vocal champions of the rule of law, including accountability for the illegal use of military force. For his service to the cause of international peace, he has been the recipient of many honors and awards throughout the years, including the French Légion d’Honneur, the Erasmus Prize, the M.C. Bassiouni Justice Award, the Martin Luther King, Jr. Nonviolent Peace Prize, and the Harvard Law School Medal of Freedom. The City of The Hague named the footpath next to its Peace Palace the “Benjamin Ferencz Path” to honor him as “one of the figureheads of international justice.”

Gabriella Blum is the Rita E. Hauser Professor of Human Rights and Humanitarian Law at Harvard Law School, specializing in public international law, international negotiations, the law of armed conflict, and counterterrorism. She is Faculty Director of the Program on International Law and Armed Conflict (PILAC), on the Program on Negotiation (PON) Executive Committee, and a former Senior Legal Advisor to the Israel Defense Forces and Strategy Advisor to the Israeli National Security Council. Blum is the co-author of The Future of Violence: Robots and Germs, Hackers and Drones—Confronting a New Age of Threat (Basic Books, 2015) with Benjamin Wittes, which received the Roy C. Palmer Civil Liberties Prize. She co-authored, with Philip Heymann, Laws, Outlaws, and Terrorists (MIT Press, 2010), which received the Roy C. Palmer Civil Liberties Prize. She is also the author of Islands of Agreement: Managing Enduring Armed Rivalries (Harvard University Press, 2007), as well as journal articles in the fields of public international law, international negotiations, and the law and morality of war. She is currently working on a book titled The Fog of Victory as a Carnegie Fellow.

J. Bryan Hehir is the Parker Gilbert Montgomery Professor of the Practice of Religion and Public Life at the Harvard Kennedy School of Government. He is also the Secretary for Social Services in the Archdiocese of Boston, specializing in ethics and foreign policy, religion in world politics, and Catholic social ethics. A member of the Council on Foreign Relations, the Board of the Arms Control Association, and the Global Development Committee, he was previously President and CEO of Catholic Charities USA, staff at the US Catholic Conference of Bishops, and faculty at the Georgetown School of Foreign Service, the Kennedy Institute of Ethics, and Harvard Divinity School. Publications include: “The Moral Measurement of War: A Tradition of Continuity and Change” and “The Moral Dimension in the Use of Force.”

Federica D’Alessandra is a Fellow at Harvard Divinity School, where she serves as an Adviser to Religions and the Practice of Peace (RPP). Ms. D’Alessandra is a leading international law and public policy scholar, working on issues of national and international security, foreign policy, international law, and diplomacy. Prior to visiting at HDS, she has been affiliated with Harvard Law School (Visiting Scholar/Visiting Researcher 2016–2017), and Harvard Kennedy School (Fellow 2013–2016, Associate 2010–2013). She often counsels and advises governments and international organizations on war crimes, prosecutions, and atrocity prevention, as well as on UN reform and peacekeeping efforts. Forbes recognized her in 2017 as one of the 30 Under 30 most influential European thinkers in law and policy. In recognition of her work and advocacy, she has received the William Reece Smith Jr. Outstanding Young Lawyer of the Year Award from LexisNexis and the International Bar Association. In 2017, she was named “Italian of the Year” by the Italian Journalist Agency.