The Program on Negotiation at Harvard Law School is pleased to co-present:

Naila and the Uprising 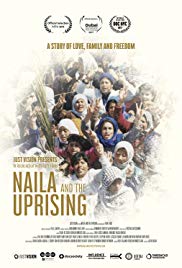 A film screening followed by a panel discussion with:

This event is co-sponsored by:

The Middle East Negotiation Initiative, Belfer Center, Harvard Kennedy School; The Program on Law and Society in the Muslim World at Harvard Law School; The Religion, Conflict, and Peace Initiative, Harvard Divinity School; The Committee on the Concerns of Women at Harvard; and Just Vision.

In honor of International Women’s Day, join us for a screening of the documentary film Naila and the Uprising.

When a nation-wide uprising breaks out in 1987, a woman in Gaza must make a choice between love, family and freedom. Undaunted, she embraces all three, joining a clandestine network of women in a movement that reflects a Palestinian’s right to self-determination for the first time. Naila and the Uprising chronicles the remarkable journey of Naila Ayesh whose story weaves through the most vibrant, nonviolent mobilization in Palestinian history – the First Intifada in the late 1980s.

The screening will be followed by a panel discussion.