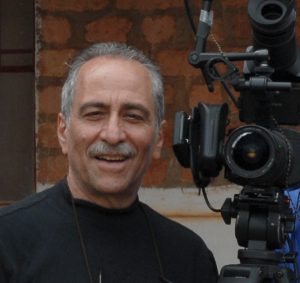 In a recent NY Times reader’s poll, they asked readers: Will We Ever Attain Peace on Earth? Over 4,000 readers responded– 61% said no, 33% said maybe and only 6% said yes. It’s clear that we need more peace and less war, but how can we expect the public to support increased investments in peacebuilding if they don’t believe that making peace is really possible?

If you want to change the world, reaching journalists and editors is a great place to begin. In April 2018, Jamil Simon organized a successful one-day symposium held at the NY Times Center in NYC. Called War Stories Peace Stories: Peace, Conflict & The Media, it brought together peacebuilders and journalists from all over the world to explore the challenges of conflict reporting and to imagine new ways to approach the issue. Jamil Simon will talk about the event and the issue of the public’s lack of awareness of nonviolent solutions to conflict.

Jamil Simon has been a documentary filmmaker for his entire career. He also has an active consulting practice in development communications, working for multilaterals like USAID, DFID and the World Bank. He has worked in 14 countries in Africa, 25+ countries overall, creating communication strategies to promote social and environmental reform in developing countries. He has promoted sustainable agriculture in Malawi, conflict resolution skills in Jordan, democracy in Mali, and water conservation in Tunisia.

Simon has always worked for peace; he began as a conscientious objector during the Viet Nam War. Currently, his efforts are focused on elevating an awareness of peacebuilding. He works to help people understand it, believe in it, think harder, work harder and take risks, to solve more conflicts nonviolently. He feels strongly that there would be more peacebuilding activity in the world if the practice were more widely recognized and better understood. He also believes that conflict prevention is critical.