America at the Crossroads: What we can learn from abroad 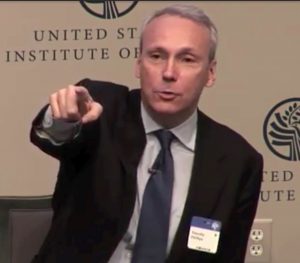 The United States is facing a range of crises that threaten the very foundation of American democracy, from deepening identity-based polarization, the erosion of democratic norms and institutions, to centuries of systemic discrimination and harm that need to be addressed and revealed in order to move forward as a nation. The United States stands to benefit from the rich experience of nations that have navigated similar challenges in their history. This presentation will consider what we can learn at this defining moment as a nation.

Tim Phillips is the founder and CEO of Beyond Conflict. Phillips has led Beyond Conflict in its efforts to help catalyze the peace and reconciliation processes in several nations, including Northern Ireland, El Salvador, Kosovo and South Africa. He has also advised the United Nations, the U.S. Department of State, and the Council of Europe.

Phillips serves on the board of directors, trustees and overseers of numerous international organizations and cultural and educational institutions. He also serves as a strategic consultant to a number of early-stage non-governmental organizations on issues of democratization, civil society, conflict resolution and technologies to bridge the digital divide in the developing world.

Phillips is a frequent speaker in national and international forums, including the Council of Foreign Relations, the Salzburg Seminar, The U.S. Congress and the U.S. Department of State, and he has lectured at a number of universities, including Harvard, Columbia and Brandeis. He has published on transitional justice, conflict resolution and national reconciliation, and his work with Beyond Conflict (formerly the Project on Times of Transition) was featured in the PBS documentary The Visionaries. He has also been a guest commentator on national Public Radio, Radio RTE Ireland and the BBC World Service.

In the private sector, Phillips was a founder of Energia Global International Ltd. (EGI), which was a leader in the development and operation of privately owned renewable energy facilities in Central and South America in the early 1990s. Phillips also helped launch and serve on the Advisory Committee of the Club of Madrid, which was founded in 2001 and works with the more than 100 former heads of state and government to promote the consolidation of democracy and around the world.

For more information on the Kelman Seminar, contact Donna Hicks at dhicks@wcfia.harvard.edu.