The Program on Negotiation at Harvard Law School and the Middle East Negotiation Initiative
are pleased to present:

Risks and Opportunities for an Arab-Israeli Peace 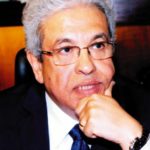 The second decade of the 21st century witnessed dramatic changes in the Middle East, from the Arab Spring to the war on terrorism in general and ISIS in particular. The weakening of Islamic State has opened up possibilities for stabilization of the region. The Arab-Israeli conflict has been part of these interactions, which creates risks of deepening the conflict or opportunities to increase possibilities for peace. Handling these risks and opportunities is the business of political leaders and elites of the region, as well as outside powers, particularly the United States.

He is a Senior Fellow at the Crown Center for Middle East Studies at Brandeis University. He worked as a political advisor in the Amiri Diwan of the State of Qatar between August 1990 and June 1993. He was a Senator in the Egyptian Shura Council, Consultative Assembly, from June 2007 to 2011. In Arabic, he published books, articles and chapters on world systems, Arab relations with the regional and global orders, European Integration, and the Arab Israeli conflict. In English, he has published papers, articles, and chapters on the Middle East Regional Security, Egypt’s political system, and National Security and Arms Control Policies in the US, France, Sweden, Japan and Singapore. He was the anchor for the Egyptian TV weekly program Wara Al Ahdath (Behind Events) from 1997 until 2011, the political analyst of Orbit program Ala Alhawa (On Air) in 2002, and an anchor for the program Maa Al Mu’aradda (With the Opposition) in the 2008/2009 TV season.