The Middle East Negotiation Initiative at the Program on Negotiation and the Loeb Fellowship of the Harvard Graduate School of Design are pleased to present:

Israeli Settlement Withdrawal:
Negotiation lessons from the past, and planning for the future 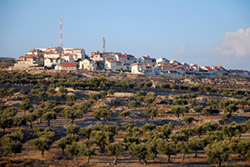 Please bring your own lunch; soft drinks and dessert will be provided.

Karen Lee Bar-Sinai is the director and co-founder of SAYA/Design for Change (www.sayarch.com). SAYA is based in Israel and specializes in what can be called “peace architecture” – using planning and design to support decision-making, negotiations and peace processes in areas of conflict.

Karen Lee Bar-Sinai and her partner, Yehuda Greenfield-Gilat (HKS alumnus), have worked with various NGOs, peace initiatives and think-tanks to show not only what an agreement could look like, but also how it is possible to develop more options creatively and how to devise detailed agreements that are implementable. SAYA’s materials were used by former Prime Minister Olmert in the 2008 Annapolis negotiations.

Robert H. Mnookin is the Samuel Williston Professor of Law at Harvard Law School, the Chair of the Executive Committee, Program on Negotiation at Harvard Law School, and the Director of the Harvard Negotiation Research Project. A leading scholar in the field of conflict resolution, Professor Mnookin has applied his interdisciplinary approach to negotiation and conflict resolution to a remarkable range of problems, both public and private. A member of the CPR Institute’s National Panel of Distinguished Neutrals, Professor Mnookin has resolved a large number of complex disputes. He has served as a consultant to governments and international agencies. A renowned teacher and lecturer, Professor Mnookin has taught numerous workshops for corporations, governmental agencies and law firms throughout the world and trained many executives and professionals in negotiation and mediation skills. His most recent books are Beyond Winning: Negotiating to Create Value in Deals and Disputes (with Scott Peppet and Andrew Tulumello) (Harvard University Press, 2000) and Negotiating on Behalf of Others (Sage 1999), an exploration of the role of agents in negotiation which he co-edited with Professor Lawrence Susskind. Barriers to Conflict Resolution, a joint project with members and associates of the Stanford Center on Conflict and Negotiation, was awarded the 1995 Book Prize by the CPR Institute for Dispute Resolution.  Professor Mnookin has been a Visiting Fellow at Wolfson College, Oxford University; a Visiting Professor of Law at Columbia Law School and a Fellow at the Center for Advanced Study in the Behavioral Sciences at Stanford University. Before joining the Harvard faculty, Professor Mnookin was the Adelbert H. Sweet Professor of Law at Stanford Law School and the Director of the Stanford Center on Conflict and Negotiation, an interdisciplinary group concerned with overcoming barriers to the negotiated resolution of conflict. Professor Mnookin received his A.B. in Economics from Harvard College in 1964 and his law degree from Harvard Law School in 1968.

This is the fourth seminar exploring the role of urban planning in negotiation, co-sponsored by the Middle East Negotiation Initiative (MENI) at the Program on Negotiation and the Harvard Graduate School of Design.   The first seminar in the series,  “The Role of Urban Planners in Negotiations: Case Study of Israeli-Palestinian Negotiations,” was held at Harvard Law School on September 28, 2012. Click here to read more.

No Responses to “Israeli Settlement Withdrawal: Negotiation lessons from the past, and planning for the future”