A Call for Peace 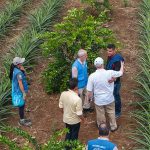 A Call for Peace examines the Colombian peace process and offers insight into the challenges experienced while negotiating the end of an armed conflict after more than fifty years of violence. Through in-depth interviews with leading global peace negotiators, foreign ministers and world-renowned diplomats, this new documentary film reveals the importance of respect and the value of open dialogue, while explaining state-of-the-art negotiation techniques and strategies.

Juan Carlos Borrero is a filmmaker from Colombia where he began his career as a cinematographer. His first film Ananeko won the best documentary award at the Bogotá Film Festival. After relocating to New York, he was part of the crew of the documentaries The Hand of Fatima, Wham! Bam! Islam!, The Loss, and American Coup, among others. More recently, he worked on the Emmy-nominated web series Casualties of the Gridiron for GQ Magazine and Vice.

He also participated in the making of a series of documentaries about the civilians and the conflict in Colombia featuring Putchy Pu Pastor de Palabras and a PBS documentary about the smuggling of tobacco in Aruba and South America. Borrero was part of the team of Contravia, an award winning TV program in Cartagena about political issues in Colombia, sponsored by the EU. In recent years, he worked as a cinematographer of the award winning feature film BRUCE (ABFF Grand Jury Prize) and the short film “secret” which was an official selection of Indy Fest. Borrero is the director, cinematographer and producer of A Call for Peace documentary.

Melodie Carli is a producer with the Associated Press, and the producer and director of A Call for Peace. Carli has extensive experience working on international projects with the United Nations. She has worked for American Television News as Director of Communications at the United Nations, managed teams and edited internal UN affiliated publications, conducted interviews with Ambassadors of various UN Missions and Consulates, and has written numerous articles and press releases. She has also produced marketing and promotional videos for UN organizations, UN Missions and affiliates and has been recognized for her professionalism internationally. She holds a Masters in Business and Corporate Communication degree from Baruch College.