The Dark Side:  Reporting on the War on Terror 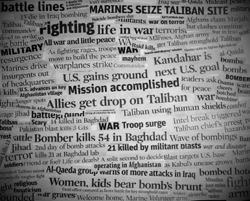 Roger Cohen joined The New York Times in 1990. He was a foreign correspondent for more than a decade before becoming acting foreign editor on Sept. 11, 2001, and foreign editor six months later.  Since 2004, he has written a column for The Times-owned International Herald Tribune, first for the news pages and then, since 2007, for the Op-Ed page. In 2009 he was named a columnist of The New York Times.Mr. Cohen has written Hearts Grown Brutal: Sagas of Sarajevo (Random House, 1998), an account of the wars of Yugoslavia’s destruction, and Soldiers and Slaves: American POWs Trapped by the Nazis’ Final Gamble (Alfred A. Knopf, 2005).  He has also co-written a biography of General Norman Schwarzkopf, In the Eye of the Storm (Farrar Straus & Giroux, 1991).

Carlotta Gall is a reporter covering Pakistan and Afghanistan for The New York Times; she has been based in Afghanistan since November 2001. From 1999 to 2001 Ms. Gall worked in the Balkans, also for The New York Times, covering the wars in Kosovo, Serbia and Macedonia and developments in Bosnia and the rest of the former Yugoslavia.She began her newspaper career at The Moscow Times in Moscow in 1994, and covered the first war in Chechnya intensively for the paper, among other stories all over the former Soviet Union. During that time, she also freelanced for the British papers The Independent, The Times and The Sunday Times, as well as The New York Times, USA Today, and Newsweek. In 1998 Ms. Gall moved to the Financial Times and The Economist where she reported on the Caucasus and Central Asia from Baku, Azerbaijan.

She is the co-author with Thomas de Waal of Chechnya: A Small Victorious War (Macmillan, United Kingdom, 1996), also published as Chechnya: Calamity in the Caucasus (New York University Press, U.S.A., 1997). The book was awarded the James Cameron prize in the United Kingdom in 1997. Ms. Gall was also awarded the Kurt Schork award for international freelance journalism in 2002, the Interaction award for outstanding international reporting in 2005, the Weintal Award for diplomatic reporting by Georgetown University, the Medill Medal for Courage in Journalism from Northwestern University, and the Hugo Shong award for reporting in Asia in 2007.

Ms. Gall was educated in England and read Russian and French at Newnham College, Cambridge. She received a Master’s degree from City University, London in International Relations and Journalism. She speaks three languages.

The 2011-2012 Herbert C. Kelman Seminar on International Conflict Analysis and Resolution series is sponsored by the Program on Negotiation, the Nieman Foundation for Journalism, the Joan Shorenstein Center on the Press, Politics, and Public Policy, The Weatherhead Center for International Affairs, and Boston area members of the Alliance for Peacebuilding. The theme for this year’s Kelman Seminar is “Negotiation, Conflict and the News Media”.