The PON Film Series is pleased to present a screening of an episode of:

Former Professor at Harvard Law School and Co-Founder of PON 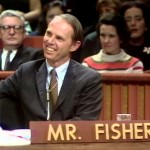 Commentary will be provided by Lisle Baker, Professor of Law at Suffolk University Law School and Bruce Patton, Distinguished Fellow and co-founder of the Harvard Negotiation Project.

Free admission; public welcome.  Pizza and soda will be served.

Created by Roger Fisher in 1969, The Advocates was an award winning show that aired nationally for over ten years on public television.   Focused each week on a concrete question to be decided on a public issue, the hour-long show used an innovative courtroom style format; two advocates presented arguments in favor or against the question, calling upon expert witnesses to buttress their case.  By presenting the arguments directly to citizens, The Advocates, as conceived and developed by Professor Fisher, helped promote greater civic engagement and better understanding of the key issues facing the nation. (Click here to view episodes online on WGBH’s Open Vault site)

The episode to be screened by PON, “If you oppose the [Vietnam] war, should you answer the call for massive civil disobedience?,” was aired on April 18, 1971, just prior to the famous May Day protests in Washington D.C.  Advocates Roger Fisher and William Kunstler debate the merit of calling for civil disobedience as a tactic to end the war in Vietnam; witnesses included Rennie Davis, Howard Zinn, Allard Lowenstein, Senator Phillip Hart, and Congressman Tip O’Neill (on tape). Former Massachusetts Governor Michael Dukakis was the moderator.  This rare footage is not available to the public, and has been provided courtesy of the WGBH Media Library & Archives.

The concept of The Advocates and how it evolved will be introduced by Lisle Baker, who worked closely with Professor Fisher during the show’s inaugural season as one of the four original Advocates. Bruce Patton, co-author with Roger Fisher of Getting to Yes, will discuss how The Advocates laid a foundation for Professor Fisher’s later work in negotiation and conflict resolution, including the development of the television show Arabs and Israelis that helped advance the cause of peace in the Middle East. They will both be available to answer questions and help the audience reflect on what Professor Fisher’s legacy might be going forward in making better use of the media to advance public understanding and civil discourse.

Roger Fisher (1922 – 2012) was the co-founder of the Program on Negotiation and the Harvard Negotiation Project, and Professor of Law at Harvard Law School from 1958-2012. Prior to joining the Law School faculty in 1958, he worked for the U.S. Government in Paris, practiced law in Washington, D.C., and served as an assistant to the Solicitor General in the Department of Justice. Professor Fisher taught and wrote extensively on international law, international conflict, and for more than a decade devoted himself almost exclusively to the task of understanding and improving the process by which people, organizations, and governments deal with their differences.

His best-selling book Getting to Yes: Negotiating Without Giving In, co-authored by William Ury, and Bruce Patton in the second edition, has sold over 3 million copies and has been translated into 23 different languages.