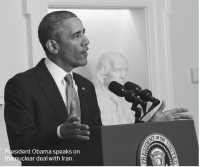 January 16, 2016, was a memorable day in U.S.-Iranian relations. That day, the International Atomic Energy Agency reported that Iran was in compliance with the terms of the nuclear agreement it reached in mid-2015 with the United States, which represented Russia, China, France, Germany, and Great Britain in the talks. The news prompted the United

Learn how to deal with difficult people and problems in our three-day Negotiation and Leadership course in Cambridge, Massachusetts. Visit www.executive.pon.harvard.edu to find out more.