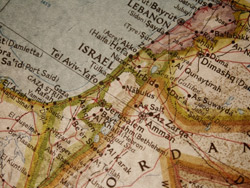 Abstract below:
In the face of daunting barriers, the Abraham Path Initiative envisions uncovering and revitalizing a route of cultural tourism that follows the path of Abraham and his family some 4000 years ago across the Middle East. It begins in the ancient ruins of Harran, in modern-day Turkey, where Abraham first heard the call to “go forth.” It passes through some of the world’s most revered cultural, historical, and holy sites, ending in the city of Hebron/Al-Khalil at the tomb of Abraham. With Abraham as a venerated patriarchal figure for Islam, Judaism, and Christianity—monotheistic religions whose adherents have so often clashed–the potential unifying power of this conception has attracted a remarkable range of supporters from around the world. From a notion crystallized at Harvard in 2004, this idea has been carefully negotiated into a concrete reality with supporting country organizations in Syria, Turkey, Jordan, Palestine, and Israel. If completed, it would eventually extend to encompass Abraham’s travels to and from Egypt, Iraq, and Saudi Arabia. With the endorsement of the U.N.’s Alliance of Civilizations, over three hundred kilometers of the Path have now been opened to a fast-growing number of travelers ranging from student study groups to Syrian President al-Assad walking a stretch of the path with former U.S. President Jimmy Carter. As it takes fuller shape, the Path variously serves as a catalyst for sustainable tourism and economic development, a platform for the energy and idealism of young people, a beacon for pilgrims and peace-builders, as well as a focus for seemingly endless media inquiries from reporters, documentary film-makers, and writers keen on telling its story to audiences worldwide. This paper provides background on the Path in terms of strategic negotiation, social entrepreneurship, sustainable tourism, and economic development.