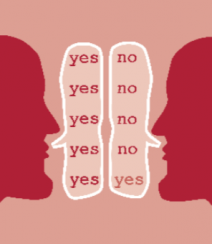 In her new book, Rebel Talent: Why It Pays to Break the Rules at Work and in Life (Dey Street Books, 2018), Francesca Gino, the Tandon Family Professor of Business Administration at Harvard Business School, argues that a healthy dose of rebellion can deepen our engagement and help us meet ourmost important goals. We asked Gino a few questions about how some of the core principles of rebel talent can improve our outcomes in negotiation.

Negotiation Briefings: In Rebel Talent, you encourage people to bring their authentic selves to their jobs. What might this mean in the context of negotiation, where we often are taught to follow best practices that may at times seem rather rigid?

Francesca Gino: One way we can all experience authenticity is by making ourselves vulnerable. Vulnerability is a powerful concept in negotiation, but one that is poorly understood. Information is power, and we often approach negotiations thinking we need to keep as much information as possible to ourselves so that we don’t end up being exploited. But this mindset often backfires. To learn about one another’s positions and, more importantly, interests, we need to share information, even if doing so makes us feel vulnerable. When we open up to others in this way, they return the “favor.” In the process, we build the trust we need to identify issues we feel differently about to discover tradeoffs and create value in negotiation.

NB: You write that curiosity is an undervalued trait in the business world. How does curiosity benefit negotiators, and how can they cultivate it?

FG: As my colleagues and I often say when teaching negotiation, “What you learn in negotiation depends on what you’re willing to learn.” This means that how we ask questions and frame our arguments greatly influences how curious we are—and how much we will learn at the table. In negotiation, learning is critical to expanding the pie and creating value.

In my own research, I have found that curiosity is beneficial to integrative negotiations, or negotiations over multiple issues where tradeoffs are possible. Why? Because our curiosity leads us to ask questions, take the other party’s perspective, and explore their interests in ways that lead to more value- creating deals.

To summon up our curiosity, we should think in advance about what we’d like to know and make a list of questions. It’s also important to identify the beliefs and assumptions we bring to the bargaining table and find ways to test their validity—again, by asking questions.

NB: In Rebel Talent, you describe the concept of “plussing,” which you learned about when visiting Pixar Animation Studios. Can you describe how it might be beneficial in negotiations?

FG: Plussing is a technique that Pixar animators use to solicit useful feedback during brainstorming sessions. Instead of criticizing ideas, animators try to add on to them in ways that improve them. The feedback system is built on candor and genuine openness to others’ ideas.

Plussing is inspired by one of the main principles of improv comedy: saying “Yes, and . . . ” rather than “No.” To see the difference between these two responses, imagine you’re onstage, and a fellow performer gestures to the wall. “This is one of the museum’s very best paintings,” she says. “No, it’s not,” you respond. “My toddler scribbled that this morning.” You might get a laugh, but you just killed the scene. By contrast, if you said, “Yes, and it’s quite amazing that my toddler had her work accepted by The Met already,” you’d be more likely to keep the action rolling.

Now imagine that you are a creative director working on a Pixar film. You don’t like the way a character’s eyes are rolling from frame to frame. Rather than tossing the sketch, you could “plus” it by saying to the artist, “I like how you drew her eyes. What if they rolled down instead of up?” This is not simply a difference
in semantics: plussing produces a very different reaction than a “No” in negotiation and other contexts. Ideas aren’t rejected in their entirety but are the basis for other ideas. Pixar has found that plussing leads to creative feedback and strong results.

We’ve all been in negotiations during which someone says something that seems unreasonable or unrealistic. We may feel compelled to just say “No,” when a better option would be to say “Yes, and . . . ” Plussing is likely to generate positive feelings and foster cooperation in negotiation because parties are constructively building on what the other person said rather than negating it.