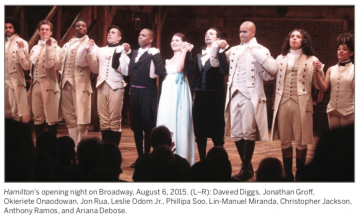 In the summer of 2015, the cast of Hamilton was on top of the world. Their highly anticipated hip-hop musical about the life of Founding Father and U.S. treasury secretary Alexander Hamilton had opened to rave reviews and euphoric audiences at Broadway’s Richard Rodgers Theatre after a stint off-Broadway. A long run, Tony awards, touring