The Program on Negotiation at Harvard Law School and the Middle East Negotiation Initiative
are pleased to present: 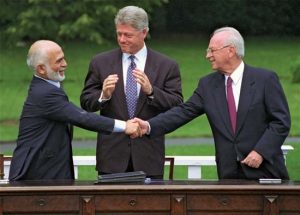 This month marks 25 years since the groundbreaking treaty was signed between Jordan and Israel, which set expectations for ending violence and developing economic cooperation, security, and management of joint natural resources for their mutual benefit.  The Jordan-Israel Peace Treaty, forged by the courageous leadership of King Hussein of the Hashemite Kingdom and Prime Minister Rabin with the full support and encouragement of U.S. President Clinton, was also expected to accelerate progress on the Israeli-Palestinian Peace Process.

H.E. Dr. Jawad Anani, who, among his other ministerial responsibilities, served as coordinator of the Peace Process during the 1990s, will share his experiences during that critical period of peacemaking and will then fast forward to assess today’s challenges and opportunities in relations between the two countries in light of developments in the Middle East and the changing roles of world powers in the region.

Dr. Anani will discuss Jordanian perception of Israel’s implementation of the treaty (and lack thereof) – in spirit and practice – particularly with regard to the Hashemite custodianship of Holy Places in Jerusalem, land leases in the Arava, and Netanyahu’s campaign promise to annex the Jordan Valley and some of the Dead Sea areas, and the subsequent difficulty of maintaining support for the treaty – especially among the public.  He will then assess successes, failures and potential opportunities in trade relations and economic development, as well as attempts to develop joint projects such as the Noble Gas pipeline, the Eilat Airport and the Red – Dead Canal Project.

Dr. Anani obtained a PhD Degree in Economics from the University of Georgia, USA. Since then, he held several high positions in the Jordanian governments including: Deputy Prime Minister, and several Ministerial and Deputy Minister posts; Chief of the Royal Court, President of the Royal Scientific Society and as a Senate Member.

Dr. Anani served as a senior negotiator in the Jordan-Israel Peace talks and headed Jordan’s delegation to the Multilateral Working Group on Refugees.  In May 1993, he joined Dr. Abdussalan Majali’s government and was charged with coordinating the peace process with Israel. As minister of information, he was tasked with explaining and defending the peace process both to the Public and the Jordanian Parliament.  Dr. Anani was very active in track-2 negotiations and participated in joint research conducted over several years at Harvard Kennedy School’s Institute for Social and Economic Policy in the Middle East. The teams produced policy recommendations on final status issues and submitted them to the respective governments.

Dr. Anani co-authored a book about the peace process with Dr. Majali and Dr. Haddadin, published in 1995.  He is a frequent contributor to various media outlets in English and Arabic and a sought-after lecturer in public forums and universities.

His contributions in the Private Sector include the establishment of three companies, running a consultancy firm and driving governance in both public and private sectors in Jordan. He chaired many quasi, government, civil society and private sector organizations. Dr. Anani is well known for championing and leading privatization in Jordan and personally supervised the privatization of Royal Jordanian Airlines, Telecom and the Cement factory.

James Sebenius specializes in analyzing and advising on complex negotiations. He holds the Gordon Donaldson Professorship of Business Administration at Harvard Business School. In 1993, he took the lead in the School’s decision–unique among major business schools–to make negotiation a required course in the MBA Program and to create a Negotiation Unit (department) which he headed for several years. The Negotiation Unit grew to several full-time negotiation faculty teaching the required course to over 800 students per year as well as offering advanced dealmaking and negotiation courses to MBAs, doctoral students, and executives. The Negotiation Unit subsequently merged with the School’s Organization and Markets Unit to form a new Unit, “Negotiation, Organizations, and Markets (NOM).”

Formerly on the faculty of Harvard’s Kennedy School of Government, Sebenius also currently serves as Vice Chair and as a member of the Executive Committee of the Program on Negotiation (PON) at Harvard Law School. At PON, he chairs the University’s annual Great Negotiator Award program, which has intensively engaged with negotiators such as Richard Holbrooke, Lakdhar Brahimi, George Mitchell, and Bruce Wasserstein. He also co-directs a project (with Nick Burns and Bob Mnookin) to extensively interview all former U.S. Secretaries of State—as of January 2017, including James Baker, George Shultz, Henry Kissinger, Madeleine Albright, Colin Powell, and Condoleezza Rice—about their most challenging negotiations.