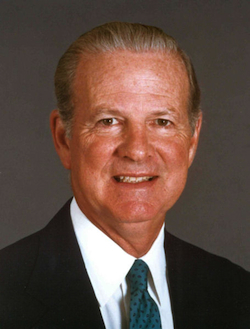 The Program on Negotiation at Harvard Law School, in conjunction with the Future of Diplomacy Project at Harvard Kennedy School, honored distinguished statesman and former Secretary of State James A. Baker, III as the recipient of their Great Negotiator Award for 2012. Secretary Baker served under President George H.W. Bush from 1989 to 1992.

A panel discussion was held on the afternoon of March 29 and included Program on Negotiation faculty members James Sebenius and Robert Mnookin, as well as Harvard Kennedy School faculty member Nicholas Burns. The Great Negotiator Award was created twelve years ago by the Program on Negotiation to recognize an individual whose lifetime achievements in the field of negotiation and dispute resolution have had a lasting impact.

Dean Minow opened the afternoon panel discussion saying, “The world is different because of the actions, the steps, the negotiations undertaken by James Baker.”

Panelist Nicholas Burns echoed Dean Minow’s opening remarks when he called James Baker one of the, “most consequential American Secretaries of State in our memory” citing the rarity of a statesmen who is, “so effective at the art of diplomacy and negotiations.”

The panel’s afternoon session began with a discussion about German reunification and the various challenges that his team faced. Secretary Baker commented that the end of the Cold War came as a complete, though not unwelcome, surprise and that preparations for the negotiations surrounding Germany’s reunification began as early as September 1989 when Hungary opened its borders.

The Fall of the Wall made it possible for the Cold War to end peacefully in spite of the East-West German border being among the most heavily militarized areas in the whole world. During the question and answer session, Harvard Kennedy School professor Karl Kaiser, Adjunct Professor of Public Policy, cited the bloodless transition of East into West, saying “There is no aspect that impresses us as much as the fact to which you referred: the Cold War could have ended in a bloodbath but it didn’t.”

Secretary Baker praised former U.S. President George H.W. Bush because he, “got a lot of grief at the time the Wall fell…for not gloating.”

President Bush acknowledged that the United States still had work to do with the Soviet Union and it was critical to create an environment conducive to negotiation.

Secretary Baker also highlighted the importance of keeping the U.S.’s allies on board.

The framework Secretary Baker and his team developed for the reunification negotiations was known as the ‘2 plus 4.’ The two Germanys would be responsible for handling Germany’s domestic aspects of reunification and the four occupying powers of France, Britain, the U.S.S.R., and the United States, would four handle all the international aspects.

While acknowledging that events on the ground were already determining much of the course of the negotiations, Secretary Baker emphasized this policy point from the two Soviet leaders as crucial to the success of reunification.

This prompted panelist Nicholas Burns to ask the former Secretary of State how he best dealt with his counterpart’s behind-the-table concerns during the negotiations to which James Baker replied that one major principal of negotiation was to understand the constraints under which your counterpart operates.

Secretary Baker was able to build a coalition and maintain its support to see through German reunification. Keeping control of the team involved constant contact and control over the message being sent out to wider world. Baker cited his extensive experience as a campaign manager in helping form his negotiation skillset and likened many of the challenges he faced on the campaign trail to those he grappled with in international relations.