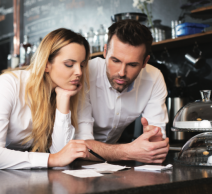 It was a dream come true. In January, Miranda and Carlos, longtime coworkers in the hospitality industry, opened a new restaurant in their small town. Locals flocked to the place, praising the ambience, food, and service.

But just two months later, Covid-19 roared into the United States, and state regulations required the restaurant to switch to carryout and delivery service only. Food sales slowed, beverage sales vanished, and the briefly profitable business began operating at a loss. As the bills stacked up and the dining room sat depressingly empty, Miranda and Carlos began arguing about decisions large and small, from layoffs to loans to dinner specials. When Miranda raised her voice in frustration, Carlos would often walk out. Soon, they were barely speaking.

Negotiators under “intense cognitive and emotional load” will have difficulty perceiving opportunities to collaborate and be more likely to come to impasse.

Many of us have been experiencing a range of painful emotions as a result of the Covid-19 pandemic, including sadness, grief, anger, and fear. With grim coronavirus statistics topping each news report, the economy in shambles, and our daily lives disrupted, our anxiety levels are through the roof.

“Initial evidence indicates that Covid-19 and its consequences are significantly increasing negative emotions and diminishing our overall sense of well-being,” Harvard Kennedy School professor Jennifer Lerner, who researches the impact of emotions on decision making and negotiation, told Negotiation Briefings. “In particular, stress—which arises from uncertainty and lack of control—is very high.”

All the pressure we’re under can be expected to make negotiations more contentious than usual. To take one example from the news, after five aldermen successfully blocked Chicago mayor Lori Lightfoot’s attempt to consolidate spending powers in response to the coronavirus, she called them “shameful,” “selfish,” and “grandstanding.” Heated emotions can also lead to subpar outcomes. Lerner predicts that negotiators under “intense cognitive and emotional load” will have difficulty perceiving opportunities to collaborate and be more likely to come to impasse.

Unfortunately, we can’t just will away our fear, anger, and anxiety. We can, however, anticipate how our negative emotions are likely to alter our and our counterparts’ negotiating behavior and adopt strategies to diminish their deleterious effects.

Research sheds light on how several common negative emotions that the pandemic is likely triggering could affect our judgment and decisions in negotiation.

Anxiety and stress. Feeling anxious and stressed impairs our negotiating ability. Negotiators who were induced to feel anxious had lower expectations of success, made lower first offers, reached worse outcomes, and were more likely to exit negotiations prematurely as compared to those who were induced to be in a neutral state, Harvard Business School professor Alison Wood Brooks and Wharton School of Business professor Maurice Schweitzer found in a series of experiments.

In another study, the higher people’s stress levels were before they negotiated, the less value they claimed, Cornell University professor Kathleen O’Connor and her colleagues found. People who doubted their ability to perform well in the negotiation were more stressed and passive; they spent more time dividing up the pie than exploring value- creating tradeoffs.

Anger. First, the good news, if you’ve been feeling angrier than usual: People demand less from angry negotiators and grant them more concessions, research by University of Amsterdam professor Gerben A. Van Kleef and others has shown. However, the many documented negative impacts of anger on negotiation overshadow this advantage.

For example, although people may back down when their counterparts get angry, they seize on opportunities to retaliate against them later, Lu Wang of the University of South Wales and her colleagues found in their research. People also are more likely to lie to angry counterparts than to happy ones, research by Van Kleef and his colleagues has shown.

Anger also impairs our decision making. As compared to being in a neutral mood, being in an angry mood makes us more reliant on stereotypes and other flawed cognitive shortcuts, according to Lerner. We tend to make riskier, overconfident decisions when we’re angry, and we’re also more likely to blame others, rather than aspects of the situation, for negative outcomes.

Sadness. Feeling sad, as compared to being in a neutral mood, disposes us to sell our possessions for lower prices and purchase items for higher prices, Lerner, Deborah Small of the Wharton School of Business, and George Loewenstein of Carnegie Mellon University found in their research. Why? When we’re sad, we’re motivated to change not only our emotional state but also our circumstances. This desire for change leads us to sell low and buy high, a phenomenon that Lerner and her colleagues dubbed the “misery is not miserly effect.” There may be a silver lining if you come across as sad while negotiating, however: Some evidence suggests your counterpart will pity you and be more generous toward you.

It’s been said many times: Crises, such as the current pandemic, tend to bring out the best and worst in people. We’ve all seen inspiring acts of generosity in our communities and in the news, even as we read about people hoarding protective medical equipment or putting others at risk by defying social-distancing orders.

On the one hand, reflecting on death can motivate us to find more meaning in life. For some, this translates to making a positive impact on the world. “Contributing to society is one way of living on forever,” write Cable and Gino. American study participants who had been assigned to write about their own death subsequently donated about 400% more money to an American charity than did participants who had instead been asked to write about dental pain, Ludwig Maximilian University professor Eva Jonas and her colleagues found in their research.

But if death awareness makes us anxious instead of reflective, we tend to become self-protective, competitive, and nationalistic rather than generous and cooperative, research shows. In Jonas and her team’s study, for instance, American participants assigned to the morbid writing task did not make higher donations to a foreign charity.

This and other research underscores the importance of trying to manage or reframe any pandemic-related anxiety we may be carrying about our own mortality before negotiating. Focusing on all we want to achieve with whatever time we have left may make us more collaborative, creative, and ethical dealmakers.

The following guidelines will help you more effectively manage your emotions in negotiation during this challenging time.

1. Accept that unrelated emotions affect negotiation behavior. People typically insist that emotions triggered by one situation have little or no effect on decisions they subsequently make in an unrelated domain. If you’re feeling anxious about a family member’s health during the pandemic, for example, you might assume that your anxiety won’t impact a work negotiation you need to conduct online.

In fact, anger, sadness, and other emotions do carry over to affect our decision making in unrelated situations, Lerner and other researchers have found. Any anxiety, anger, or sadness you bring to a negotiation could have the types of effects previously described. So, before negotiating, assess how you’re feeling. If you’re overwhelmed, consider postponing talks for another day. If you feel up to the task, consider how your emotions might affect your judgment, and commit to not making binding decisions until these feelings subside.

2. Take a break. When we’re experiencing strong emotions, we incorrectly predict what we will want when we feel calmer and more rational. As a result, an angry negotiator may make a decision she later deems overly risky. We also mispredict what will make us feel better, as in the case of a sad negotiator overpaying for an item that only briefly buoys his mood.

For these reasons, it’s typically wise to take a break whenever you are feeling upset during a negotiation. The same advice applies if your counterpart appears to be dealing with tough emotions. Not only might you make subpar decisions, but because emotions are often contagious, you could quickly spiral into conflict, as was the case for restaurateurs Miranda and Carlos in the opening vignette.

3. Get to the root of your feelings. During your break, take time to reflect on your (and your counterpart’s) negative emotions and their likely source. But don’t assume these strong emotions will go away after you’ve cooled down.

“Instead of repressing emotions to allow for ‘unclouded’ reasoning, successful negotiators manage their emotions in such a way that they obtain better outcomes,” write Van Kleef and Marwan Sinaceur in a chapter in the book Handbook of Research on Negotiation (Edward Elgar Publishing, 2013).

One way to productively manage emotions is to reframe them. For example, Alison Wood Brooks recommends reframing the high state of physiological arousal associated with anxiety as excitement. If you feel nervous before a negotiation—sweaty palms, dry mouth—telling yourself that you’re excited can actually make you feel excited rather than anxious and improve your performance, her research shows. Similarly, when people approached a negotiation as a challenge rather than as a threat, they were less fearful and more confident, Kathleen O’Connor and her colleagues found in their research on stress.

Examining the source of your emotions can also help. Returning to our opening story, suppose that Carlos, upon reflection, recognized that he was more upset about the situation he and Miranda were facing than he was at her. He also regretted his habit of walking out whenever they got into an argument. These realizations motivated him to talk to her about their conflict and propose ways to work together more collaboratively.

4. Create space for strong emotions. Positive emotions such as happiness and gratitude can be expected to generate flexibility, creativity, rapport, and other beneficial effects in negotiation. But even emotions that we view as negative have their place at the bargaining table. If someone has repeatedly taken advantage of you, showing your anger may be the best way to get them to back down. Negotiators might also use their genuine anger strategically to claim value or their sadness to effectively solicit help, according to Hebrew University of Jerusalem professor Maya Tamir. (By contrast, faking emotions you don’t feel often backfires, research shows.)

The key is to create a negotiating environment in which parties can express strong emotions respectfully and stay in control. Business partners Miranda and Carlos realized they’d been so busy troubleshooting problems on the fly that they hadn’t been making time for regular meetings. After they began meeting daily before staff arrived at the restaurant, they found they were able to more calmly make joint decisions. In this quiet space, they also began to feel comfortable talking about their recent clashes, sharing their fears, and planning for a brighter future.