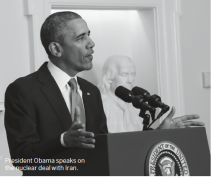 January 16, 2016, was a memorable day in U.S.-Iranian relations. That day, the International Atomic Energy Agency reported that Iran was in compliance with the terms of the nuclear agreement it reached in mid-2015 with the United States, which represented Russia, China, France, Germany, and Great Britain in the talks. The news prompted the United States, the European Union, and the United Nations to officially lift their longtime economic sanctions against Iran. That same day, following more than a year of negotiation, Iran released four Americans who had been imprisoned in Iran; in return, the United States freed seven Iranians and rescinded international arrest warrants on 14 other Iranians.

Both the nuclear and prisoner-swap deals were controversial. In the United States, officials and observers on the political right objected to the idea of the Obama administration agreeing to concessions on Iran’s nuclear program, which they said could threaten U.S. security. The prisoner deal was panned for setting a dangerous precedent that could put Americans in Iran at risk.

Moreover, to some, the timing of the two deals seemed suspicious. U.S. and Iranian leaders had made efforts to separate the two sets of negotiations, the New York Times reports. Yet the fact that Iran freed Americans the same day its sanctions were lifted gave the impression that the prisoners had been pawns in a larger game.

This past summer, new revelations revived criticism of the two deals. In this article we describe those developments and then offer advice on how to ensure your negotiation and its outcomes will be palatable to observers.

A settling of dues or a ransom?

On August 3, the Wall Street Journal broke the story that on the same day Iran released the four imprisoned Americans, the Obama administration airlifted $400 million in cash to Iran. The image painted by the Journal of “wooden pallets stacked with euros, Swiss francs, and other currencies . . . flown into Iran on an unmarked cargo plane” suggested to many that the White House had secretly authorized a ransom payment for the prisoners.

In fact, the $400 million was the first installment of a $1.7 billion settlement that the Obama administration had reached with Iran over a failed arms deal the two countries had signed back in 1979, the Journal reports. President Obama announced the resolution of the dispute and its terms on January 17, the day after the prisoners were released, but did not disclose the timing of the $400 million payment.

At first, senior U.S. officials insisted that there was no connection between the payment and the prisoner release. President Obama himself denied the accusation, saying, “We do not pay ransom. We didn’t here and we won’t in the future.”

The fact that Iran freed Americans the same day its sanctions were lifted gave the impression that the prisoners had been pawns in a larger game.

The New York Times reported that senior U.S. Department of Justice officials had expressed reservations about how it would look to send a plane loaded with cash to Iran at the same time that Iran was releasing imprisoned Americans. But the U.S. State Department, which led the prisoner-swap negotiations, reportedly overruled those objections, with approval from the White House.

The story took another turn on August 18, when the State Department conceded that it had delayed making the $400 million payment to Iran for several hours on January 16 to ensure that Iran released the imprisoned Americans. State Department spokesperson John Kirby said in a briefing that the United States “took advantage of the leverage” gained from dangling the possibility of the cash payment to ensure that the Americans “got out safely and efficiently.” The two deals—the prisoner release and the financial settlement with Iran—were separate, he noted, but their outcomes were deliberately timed to coincide. The news fanned Republicans’ charges that the Obama administration had paid a ransom for hostages. On the campaign trail, Republican presidential candidate Donald Trump said Obama had lied about the motivation for the $400 million payment. House Republicans said they would hold hearings on the payment and introduce legislation aimed at preventing future hidden cash payments to Iran.

On September 1, the Iran nuclear deal returned to the spotlight when the Washington-based Institute for Science and International Security released a report alleging that the United States and its foreign negotiating partners had secretly agreed to allow Iran to evade certain restrictions in the agreement. The allowances were made to meet a deadline for securing relief from economic sanctions for Iran. The report drew on information from officials of several governments involved in the negotiations.

Iran was allowed to exceed the deal’s limits on the amount of low-enriched uranium it can keep in its nuclear facilities, among other exemptions, according to the report. A joint commission established to oversee the deal’s implementation, made up of representatives of the United States and its five partners in the negotiation, plus Iran, reportedly approved the exemptions.

The report claimed that the Obama administration had informed Congress about the exemptions on January 16, the day Iran’s sanctions were eased. But Democratic senator Robert Menendez, a member of the Senate Foreign Relations Committee and a leading opponent of the Iran deal, told Reuters he had not been briefed on the exemptions.

The news revived Republican criticism of the nuclear deal and raised concerns among nuclear-arms experts that such secret allowances make it difficult to know how much weapons-grade uranium Iran is capable of producing.

Bringing ethics to the forefront

The two revelations—of pallets of cash being used as leverage in the release of American prisoners, and Iran’s secret exemptions in the nuclear deal—cast a pall over two of President Obama’s signature negotiations. The stories remind us of the importance of considering not only what a negotiation may achieve but also how outsiders will judge the fairness and ethicality of its processes and outcomes. How can professional negotiators avoid the mistakes of the Obama administration and secure broad approval for their deals? Consider the following three guidelines:

1. When dealing with an enemy, take extra precautions.

There are often valid reasons for doing business with a sworn enemy, such as a competitor you don’t trust or someone whose unethical behavior you condemn. For example, members of a community group might decide to sit down with a polluter in their area after public protests have failed to change its behavior. In such situations, observers may object to your decision to negotiate and try to put up roadblocks. You might meet with these potential deal spoilers privately and try to listen, without judgment, to their concerns. If you decide to move forward with negotiations, aim to keep interested observers informed and as engaged as possible throughout the process.

When you’re engaging in two negotiations with the same party (or even different parties) at once, you may stumble upon ways to link the two deals to maximum advantage. In 2015, for example, the New York Yankees simultaneously faced negotiations with (1) a fan who had caught a prized Alex Rodriguez home-run baseball and (2) Rodriguez over a marketing bonus. Team executives wrapped up both deals to their satisfaction by linking them. They convinced the fan to hand over the A-Rod home-run ball in exchange for a significant donation to a charity the fan supported and then included the ball as part of their revised offer to Rodriguez.

Such linkages can provide opportunities, but they can also create controversy in touchy situations. To take one example, to resolve the Cuban Missile Crisis with the Soviet Union in 1962, President John F. Kennedy agreed to remove nuclear missiles from Turkey. Kennedy denied that the two issues were linked, but they clearly were.

The lesson? Before linking two negotiations, consider how the parties involved, and interested observers, too, would react to the linkages if they found out about them.

This leads us to a broader point: It is always wise to consider what would happen if your decisions and behavior in a negotiation became public knowledge. That doesn’t mean your negotiations can’t be private. But it does mean that you should pause to think about how various proposals and arrangements would affect outsiders. When you do so, you are likely to bring ethical concerns to the forefront and clear the way for a fair and honest negotiation.