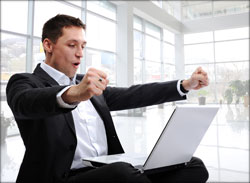 Adapted from “Strategies for Overcoming E-Mail’s Weaknesses,” first published in the Negotiation newsletter.

Negotiators communicating via e-mail can easily be blinded to the medium’s pitfalls. In her research, professor Janice Nadler of Northwestern University Law School confirms that the “impoverished” nature of e-mail—its dearth of physical, social, and vocal cues—often leads to misunderstandings, ambiguous messages, and unnecessary impasses.

Nadler proposes a very simple insurance policy for those preparing to negotiate on e-mail: small talk. In a study of participants negotiating a commercial transaction via email, she found that those who engaged in a brief, getting-to-know-you phone conversation achieved more positive outcomes than did those who did not speak beforehand. Small talk led to better outcomes all around: greater probability of agreement, more positive post-negotiation feelings, and higher expectations of future success. In dramatic contrast, negotiators who skipped the small talk were more than four times more likely to reach an impasse and end up feeling resentful and angry about the negotiation.

According to Nadler, the getting-to-know-you phone call set off a chain reaction of goodwill. Such calls allowed e-mail to proceed with greater rapport, which created a more cooperative mindset among negotiators. In turn, cooperation generated greater information sharing. This information sharing allowed parties to discover more creative trades, made both sides more successful, and reduced the likelihood that either party would opt for their alternative to negotiation. While Nadler’s work focused specifically on legal negotiations, its logic is relevant across negotiation contexts.

Nadler notes that telephone small talk is not the only way to build rapport. Social psychologists, for example, have long advocated the role of flattery and humor in social interaction. But Nadler’s findings question the “get down to business” approach so typical of many task-oriented professionals.