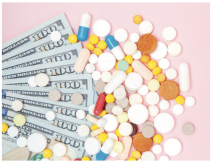 There’s at least one thing that politicians as ideologically dissimilar as President Donald Trump and Senator Elizabeth Warren have agreed on: Prescription drug prices are too high in the United States. Americans pay about $1,200 per year, on average, for their medication, according to the Organization for Economic Cooperation and Development— about twice as much as citizens of other countries. As a result of ever-rising drug costs, more Americans are choosing not to fill prescriptions or to skip doses, CNBC reports.

Numerous factors underlie the sky-high prices. To begin with, pharmaceutical firms have the exclusive right to sell new drugs for a certain number of years before generic versions can enter the U.S. market. This monopolistic pricing power is intended to give drugmakers incentives to invest in producing new medications. Yet drug prices rose 9% annually from 2008 to 2016 not because of the entry of new drugs, but because manufacturers raised the prices of existing drugs, a study by University of Pittsburgh School of Pharmacy professor Inmaculada Hernandez and her colleagues showed. Such price hikes help maintain the industry’s high profit margins: The pharmaceutical industry recorded the 10th-highest after-tax profits, about 22.8% of income, of the 100 business sectors studied by New York University professor Aswath Damodaran in 2019.

Across industries, price negotiations can be fraught with uncertainty for buyers, who often lack objective information about a product’s or service’s value. Buyers may be unsure about the quality of what’s being sold and how useful it will be to them over time. They also may know little about how much money, time, and other resources the seller invested in the commodity or service, or be unable to verify the seller’s claims. Lack of transparency can lead sellers to take advantage and buyers to vastly overpay—especially when the seller has a monopoly on the good or service.

Several remedies have been proposed to lower prescription drug prices in the United States, such as allowing the federal government to negotiate Medicare drug prices. As we’ll see, one innovation—or disruption, depending on one’s perspective— that’s begun to give consumers some relief involves applying independent objective standards to drug-pricing negotiations, as Denise Roland writes in a recent in-depth article in the Wall Street Journal. It’s an approach that buyers and even sellers in other realms should be motivated to apply to improve the transparency and fairness of their negotiations.

In sickness and in health

ICER evaluates prescription drugs based on how many years of good health patients can be expected to gain from them. In its calculations, a single QALY is equivalent to one year of perfect health. Each QALY that a drug gives back to a person has a maximum value of $150,000 across a person’s life span. ICER uses such calculations to reach a “value-based price benchmark” for the annual cost of a drug that can be compared to the manufacturer’s price.

ICER has judged less than one-third of the 79 drugs it has reviewed since 2015 as being fairly priced, which has led the pharmaceutical industry’s trade group, PhRMA, to call the group biased toward insurers. PhRMA and others also say QALY is a blunt instrument that undervalues the elderly, as well as people with disabilities and chronic illness.

Others object to the very idea of putting a dollar value on the quality of a person’s life. The Obama administration banned the use of QALY-based analysis in Medicare in the Affordable Care Act, and the Trump White House has not accepted the concept. But as Michael Sherman, chief medical officer of insurer Harvard Pilgrim Health Care, told the Journal, “We are [already] putting a price on a year of life. We just let the pharmaceutical companies choose it.”

“The goal is to have independent information available to catalyze the kinds of discussions that should be happening in broad daylight … and not behind closed doors,” ICER founder Pearson told the Journal.

Canada, Britain, the Netherlands, and other countries have used QALY-based methodologies for years to gain leverage in price negotiations with drugmakers. In the United States, private insurers have begun drawing on ICER’s conclusions to negotiate discounts from drugmakers. And pharmaceutical firms Sanofi, Amgen, Novartis, and others have lowered the prices of new drugs to fall in line with ICER assessments. Why? Because insurers and other payers are more likely to cover and nudge patients toward drugs that have an ICER endorsement, industry publication FiercePharma reports.

It’s not yet clear if ICER will become an industrywide source for information on the value of prescription drugs. PhRMA believes more stakeholders should be involved in setting prices, including patients, according to FiercePharma. But ICER has won over some drugmakers by listening when they object to its conclusions, even reversing its decisions in a few cases.

As this story from the pharmaceutical industry illustrates, in a sales negotiation, buyers are more likely to view price negotiations as transparent and fair when they have access to objective, unbiased data about the value of the product or service being sold.

Home inspectors, mechanics, jewelry appraisers, lawyers, and other experts can help us determine the true value of various commodities and whether to bid on them. But it’s not always the norm to have experts weigh in on whether a good or service is worth the price. Lacking such input, a buyer and seller may reach self-serving valuations and fail to come to agreement.

“We are [already] putting a price on a year of life. We just let the pharmaceutical companies choose it.”

Whenever you feel objective data is missing in a sales negotiation, it can be wise to consult with an unbiased expert for his opinion. An even better move can be to engage your negotiating partner in a joint fact-finding process, as MIT professor Lawrence Susskind recommends in his book Good for You, Great for Me: Finding the Trading Zone and Winning at Win-Win Negotiation (PublicAffairs, 2014). In joint fact finding, negotiators decide together what data they need, which expert (or experts) to hire, how to pay them, and so on. The negotiators then assess the expert’s findings together and jointly decide how to apply them. Parties will still have incentives to interpret the results to their advantage or reject them entirely. But if they agree up front to abide by the expert’s conclusions, they will be less likely to walk away from a mutually beneficial deal.

When you and your counterpart jointly solicit objective data, you will foster a more collaborative and trusting relationship. That, in turn, is likely to turn your negotiation from a single-minded focus on price to an exploration of whether a deal would be right for each of you in the long run.

When negotiators replace intuitive decision making with rational analysis, it can be a whole new ball game. That’s what Major League Baseball (MLB) teams—inspired by Billy Beane’s turnaround of the Oakland A’s, as recounted in Michael Lewis’ book Moneyball: The Art of Winning an Unfair Game—found when they began using advanced computer models to analyze players’ ability and value in the early 2000s. The widespread use of so- called sabermetrics in baseball has led to seismic changes in the sport, from how it’s played to how player contracts are negotiated.

The power wielded by sports agents has shifted as well. Scott Boras, a baseball agent who is as famous as many of the star players he represents, used to be able to “enter negotiations with reams of statistics and information that at times outclassed what was available to the teams,” writes Jared Diamond in the Wall Street Journal. That’s no longer the case. Armed with their own painstakingly gathered data, baseball executives are in a much better position to refute agents’ outsized claims and hold the line on costs. As a result, negotiations for top free agents have slowed to a crawl this winter, with agents and teams playing a slow-motion game of chicken to see who caves in first on salary and other issues.

The seismic changes in baseball show what a dramatic effect objective data can bring to negotiations and industry practices more generally. These changes can’t always be anticipated, but they do make the game more exciting.