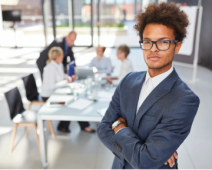 The death of George Floyd beneath the knee of a White Minneapolis police officer provoked many Americans to protest police brutality and racial injustice for the first time. Floyd’s killing has also prompted U.S. organizations, most of which are led by Whites, to reckon with the fact that they have failed to create workplaces where African Americans are adequately represented, treated equitably, and feel a sense of belonging. Black Americans continue to be paid less than members of other racial groups for the same work, are severely underrepresented in leadership roles, and regularly confront racist policies and behavior.

Acknowledge our racial bias and complicity in racism

Explicitly racist policies and behaviors—slavery, segregation, police killings of unarmed Black people—are easy to condemn. What is often less apparent to White Americans is that, because of their lifelong immersion in an inherently racist society, most have internalized negative racial stereotypes about Black Americans that inflict immense harm.

“Most of us have implicit attitudes that differ from the beliefs we consciously understand ourselves to hold,” writes New York University professor Dolly Chugh in her book The Person You Mean to Be: How Good People Fight Bias (HarperCollins, 2018). Psychologists Mahzarin Banaji (Harvard University), Anthony Greenwald (University of Washington), and Brian Nosek (University of Virginia) devised a clever online test that is believed to reveal our unconscious, or implicit, attitudes. The Implicit Association Test (IAT) requires test takers to pair words and pictures as quickly and accurately as possible, a task that becomes difficult for most people when we’re asked to make nonstereotypical choices. For example, many White test takers struggle to quickly pair the word good with a Black person’s face, but do so effortlessly when the face is a White person’s. About 75% of all people who take the race IAT in the United States show an implicit racial bias toward Whites; 85% of White Americans do. (You can take an IAT yourself at https://implicit.harvard.edu.)

Becoming aware of one’s implicit bias can be unsettling, but it’s a critical early step in acknowledging one’s role in perpetuating and tolerating racist organizational practices.

Far from benign, implicit bias can “leak into microaggressions and behaviors that are consequential in the real world,” writes Chugh. It can lead White managers—without recognizing their racial bias—to conclude that a particular Black candidate might not be a “good fit” for the organization, to call on Whites more often than Blacks in meetings, or to penalize Black colleagues, but not White colleagues, when they make mistakes.

Becoming aware of one’s implicit bias can be unsettling, but it’s a critical early step in acknowledging one’s role in perpetuating and tolerating racist organizational practices.

Look for other pipelines

Organizations often protest that there isn’t a strong enough pipeline of qualified African American candidates for professional roles, Thomas-Hunt and Wharton School dean Erika James told University of Virginia professor Laura Morgan Roberts at a March panel at the Darden School of Business. As a result, says Roberts, “the issue of inclusion becomes framed as a question of accommodating and lowering standards, rather than a question of enhancing, strengthening, and amplifying the organization.”

To move beyond the false conclusion that there aren’t enough qualified African Americans available, leaders need to carefully study how candidates enter the organization, said Thomas-Hunt. If an organization is recruiting only from the Ivy League, it might branch out to state schools and historically Black colleges and universities. An organization might also institute a policy of leaving names off of résumés to keep evaluators’ implicit racial biases from creeping in during the initial screening phase. And if White people are relying on their personal networks and connections to find talent, they need to recognize that they are likely drawing from a primarily White pool—and disadvantaging racial minorities who lack such connections.

In a study of students from elite universities applying for jobs at top consulting and investment banking firms, Kellogg School of Management professor Lauren Rivera found that interviewers focus keenly on assessing candidates’ “fit” with the organization. But rather than gauging candidates’ talent and aspirations, fit is often used as a code word for passion-oriented hobbies, such as marathon running, and alma maters where people of color are underrepresented.

Greater structure can help make job interviews more uniform, rational, and equitable, writes Harvard Kennedy School professor Iris Bohnet in What Works: Gender Equality by Design (Belknap Press, 2016). Bohnet advises interviewers to draw up lists of questions to be presented to all candidates, with each question weighted according to its importance. All questions should be asked in the same order and scored in the moment so that faulty memories don’t later bias the process.

Lists of questions also need to be debiased. Skip those that assess fit, and include questions aimed at identifying any hardships and struggles that candidates have had to overcome. “It’s important to recognize the various obstacles that many African American candidates had to traverse to get to where they are,” Roberts said in an interview in the January issue of Negotiation Briefings. “For instance, when you’re evaluating two graduates from an MBA program, look not only at their degree and class placement but also at their journey to and through the entire educational system.” That doesn’t mean lowering the bar for Black candidates, but viewing the “incredible talent, endurance, and ingenuity” that has been required of many African Americans for years as a “source of strength,” she says.

Move from a business case to a moral case

Although many organizations have appointed diversity and inclusion (D&I) officers, once in the door, Black employees “continue to face sticky floors, glass ceilings, and labyrinthine career paths,” write McCluney and Rabelo.

Here again, a preoccupation with “fit” harms racial minorities. “D&I officers are tasked with monitoring and constraining the behaviors and appearance of Black employees” to fit within White norms and behavioral expectations, according to McCluney and Rabelo. To try to blend in with the dominant workplace culture, African Americans might feel they need to “chemically relax (straighten) their hair, conform with coworkers’ behavior, ‘whitewash’ their résumés by deleting ethnic-sounding names or companies, hide minority beliefs, and suppress emotions related to workplace racism,” write Roberts and Anthony Mayo in a recent Harvard Business Review article.

This focus on superficial conformity reflects the orientation of many organizations toward making the “business case for diversity”—that is, valuing diversity primarily as a means of opening up more diverse markets and thus increasing profitability, according to McCluney and Rabelo. In the aftermath of the 2014 shooting of Michael Brown by a police officer in Ferguson, Mo., Starbucks, then led by Howard Schultz, launched an initiative that included dialogues with police chiefs and having baristas (many of them Black) write the hashtag #RaceTogether on millions of Starbucks cups. In the end, the campaign came across as a shallow publicity stunt aimed at increasing revenue for Starbucks.

Rather than focusing on profit maximization and “managing Blackness,” D&I efforts should be “oriented around fairness, equity, and justice,” write McCluney and Rabelo. “We can’t simply ask, ‘What’s the most lucrative thing to do?’” write Roberts and Mayo in Harvard Business Review. “We must also ask, ‘What’s the right thing to do?’”

Leaders need to engage in the difficult but ultimately more rewarding work of addressing systemic barriers to Black workers’ engagement and development. In 2018, three years after Starbucks’ #RaceTogether initiative, the branch manager of a Philadelphia Starbucks store had two Black men who were waiting for an associate to arrive arrested for trespassing. The incident spurred Starbucks to launch deeper efforts to address racial bias experienced by customers and employees, including closing all stores for a day of anti-bias training.

Managers should also regularly be asking each employee (regardless of race) what they need and whether they feel safe and supported, Thomas-Hunt told HBR. She notes that White managers often feel uncomfortable giving feedback to their Black employees. Failing to receive adequate guidance, Black workers are often shown the door without explanation. “Like everyone else, Black employees need honest feedback in order to grow and to get access to leadership opportunities down the line,” she said.

Be a better listener and ally

Fearful of saying the wrong thing, Whites often “shy away from conversations about implicit biases that disadvantage Black candidates and leaders,” Roberts told Negotiation Briefings. That puts the burden on Black employees to initiate conversations about race.

Leaders need to give employees opportunities to hold difficult conversations where members of minority groups can feel safe opening up about experiences of exclusion, ostracism, and undermining, write McCluney and Rabelo. It’s especially important to check in with African American employees during this time of social unrest. African Americans have a “steady, shared intergenerational practice of masking the pain of racism, injustice, grief, and loss,” Roberts said during a Wall Street Journal podcast. “Now people in the workplace all over the world are saying, ‘I can’t do that right now. I can’t paste on the smile.’”

White employees also can be effective allies by drawing senior leaders’ attention to homogeneity, exclusion, and identity suppression in their organization. That includes stepping in to defend Black colleagues facing subtle microaggressions and more overt racist incidents.

Suppose that in a meeting you’re attending, a Black male colleague offers feedback to a White colleague on her work. You consider his remarks to be fair and professional, though likely difficult to hear. The White colleague later complains to you that she felt “threatened” by the feedback. This type of complaint about a Black man could be “career ending” if it’s not corrected or addressed, said Roberts during a LinkedIn Live interview with Harvard Business Review editors. She says, “Here’s where you step in, clarify, and call people to consciousness: ‘Wait, did you just characterize him as being threatening? … Because I thought he was just giving you feedback on your work. Maybe we should think about how we’re framing this because I find his feedback to be quite valuable.’”

Looking inward and scrutinizing the status quo at your organization is difficult but essential work. For more advice, consult the books and articles we’ve mentioned, and reach out to diversity experts whose guidance is grounded in the latest research.