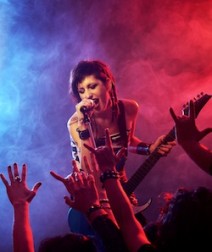 If you are a star athlete, an up-and-coming author, or a Hollywood actor, then you might not think twice about enlisting an agent to help you negotiate your next payment contract. If you are a professional in most other fields, however, you get by on your wits, thorough research, and negotiation skills and experience.

The founders of a new talent agency for top computer programmers, 10x, would like to change that.

Longtime talent agents for entertainers like John Mayer and Vanessa Carlton, Michael Solomon and Rishon Blumberg more recently started representing a group of professionals they call “digital rock stars”—the most elite computer programmers in Silicon Valley, writes Lizzie Widdicombe in a recent New Yorker profile of 10x. The agency, which currently represents about 80 freelance engineers, gets its name from the popular notion in the tech world that the best programmers are ten times more productive than their peers. A few other talent agencies for tech talent have recently sprung up, including HackMatch and Hired.com.

Why would computer programmers need agents to help them win prized projects and stellar pay? For several reasons, according to Solomon and Blumberg.

First, the marketplace that matches tech companies and entrepreneurs with the best technologists can be inefficient. Those doing the hiring may lack the expertise or connections needed to find people to perform complex technological assignments like building websites and apps. Solomon and Blumberg say they’ve avoided this pitfall by partnering with an engineer, Altay Guvench—their first client—who vets new talent and helps coordinate their assignments.

Second, small firms and start-ups are often at a disadvantage when competing with the large Silicon Valley firms for the best programmers. The top firms frequently get into bidding wars for computer engineers, and they routinely buy start-ups for the sole purpose of acquiring their staff, according to Widdicombe. In fact, some of the top firms (including Apple and Google) recently settled a lawsuit with engineers who accused them of illegally suppressing their pay in a secret anti-poaching pact. Smaller firms can theoretically level the playing field in this environment by hiring through an agency that has access to programmers who are looking for interesting assignments.

Third, “10xs” are often underpaid relative to the immense value they can bring to a firm. Todd McKinnon, the CEO of Okta, a cloud-computing company, told Widdicombe that top engineers can “come up with an algorithm that will support ten million people, or a great engineer who’ll come up with an algorithm that supports a billion people.” The average salary of a Silicon Valley engineer, $130,000, can be peanuts compared to the revenues they bring in. Moreover, programmers tend to undersell themselves and fail to negotiate their salary offers. Similar to agents in book publishing, 10x takes 15% of its clients’ earnings, which the company’s founders claim to have doubled in the past year.

“I think everyone should have a manager,” Solomon told the New Yorker. “Not just creative people—everyone. It’s cool to have an advocate and a confidant. We can all be rock stars.”

But should we all be aspiring rock stars? Perhaps not. MIT economist David Autor told Widdicombe that the “rock-star model” of freelancers flitting from one plum assignment to the next only works for people with “unique talents.” By contrast, because most of us are replaceable, we benefit from more stable employment and thus have less need for an agent.

Agents can be useful when we lack expertise or entry into a particular field. In some industries, agents can open doors that are closed to laypeople. But there are drawbacks to entrusting an agent with your employment negotiations. Most notably, an agent’s incentives are never perfectly aligned with those of her client. Consequently, there is always the risk that your agent will make decisions that go against your best interests, such as neglecting to negotiate issues other than price or failing to bargain hard for you due out of a desire to preserve a relationship with the other side.

Before allowing an agent to negotiate for you, you should always thoroughly discuss and negotiate his potential responsibilities and compensation. Then analyze whether he is likely to bring value to the table—or whether you’d be better off going it alone.

No Responses to “In Business Negotiations, Do We All Need Rock-Star Agents?”